For a July, 2016 attempt at a multiple-qualification, Jeff invited Eric and Miles for a weekend at the cabin. Unfortunately, Jeff had left his go-to portable antenna and feedline at home in Athens, Ohio. Fortunately, Eric had with him his Enhanced KX3 Travel Kit and MFJ-1910 33' fiberglass mast and tripod. The mast, tripod, and 28' end-fed wire with three radials worked perfectly for the qualifications. 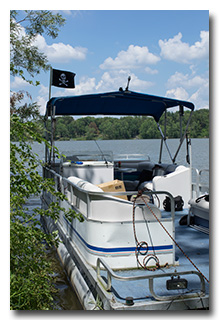 The boat, flying the Jolly Roger

While Eric and Miles went through the well-rehearsed steps to erect the fiberglass mast, pull up the 28' wire vertical, and to deploy the radials, Jeff assembled the rest of the station: an ICOM IC-706MkIIG transceiver, an LDG autotuner, and the large marine battery. 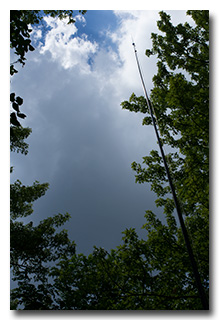 A view up the antenna

For the U.S. Islands Award Program, to qualify an island, one must use one callsign to make at least twenty-five QSOs with stations in at least two DXCC entities. With the help of Ted Jacobson, W8KVK and Mike Hansgen, K8RAT providing spotting-support, Jeff was able to make forty QSOs in the U.S. and Canada in just about an hour and forty-five minutes. 40m SSB was good for 39 stateside QSOs. In order to get the second DXCC entity, in this case a station in Ontario, Canada, Jeff had to QSY to 80m SSB. 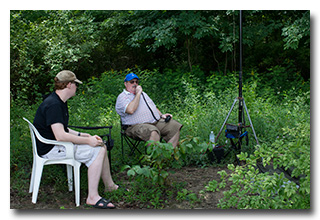