For a July, 2016 attempt at a multiple-qualification, Jeff invited Eric and Miles for a weekend at the cabin. The first island they would attempt to qualify was Little Eagle Island (OH-058) on a lovely Saturday morning. Jeff was to provide the radio gear, power, and boat. Unfortunately, Jeff had left his go-to portable antenna and feedline at home in Athens, Ohio. Fortunately, Eric had with him his Enhanced KX3 Travel Kit and MFJ-1910 33' fiberglass mast and tripod. The mast, tripod, and 28' end-fed wire with three radials worked perfectly for the qualifications.

After loading the boat about 8am, Jeff gave Eric and Miles a short tour of a portion of the lake. During this tour, the group got a very good look at a mature bald eagle flying low over the water. 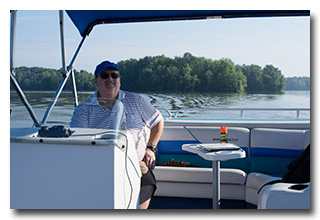 After the tour, Jeff directed the boat around Little Eagle Island. A nice landing was found and Eric and Miles followed a well-beaten path from the landing to the top of the island where a nice level clearing was found, perfect for a 28' wire vertical. 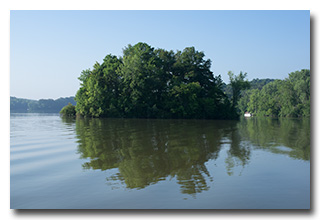 Jeff, Eric, and Miles carried all the gear to the top of the island over several trips. Miles did the hard work, carrying the large marine battery. While Eric and Miles went through the well-rehearsed steps to erect the fiberglass mast, pull up the 28' wire vertical, and to deploy the radials while being aware of the poison ivy in the clearing, Jeff assembled the rest of the station: an ICOM IC-706MkIIG transceiver, an LDG autotuner, and the large marine battery. 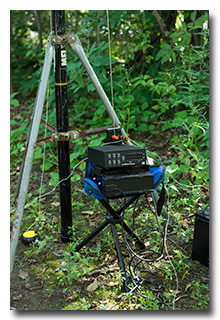 The rig at the base of the mast

For the U.S. Islands Award Program, to qualify an island, one must use one callsign to make at least twenty-five QSOs with stations in at least two DXCC entities. With the help of Ted Jacobson, W8KVK and Mike Hansgen, K8RAT providing spotting-support, Jeff was able to make thirty 40m SSB QSOs in the U.S. and Canada in just about ninety minutes. 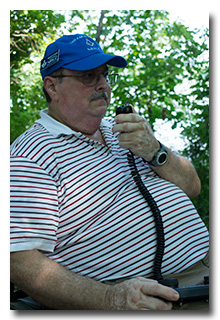