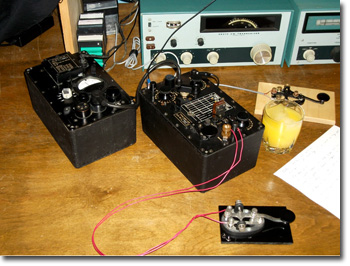 Always occuring January 1st, ARRL Straight Key Night is an annual event to honor the CW tradition of Amateur Radio. Amateurs are encouraged to operate using straight keys, semi-automatic bugs, or other manual keying devices. In recent years Straight Key Night has become an event for which participants put vintage "boat anchors" or homebrew equipment back on the air.

Transmitter - KB8TAD's T-784/GRC-109 transmitter and PP-2685 power supply modules from AN/GRC-109 Special Forces radio set into 195' Inverted-L, tuned by T-784/GRC-109. The power output was not measured but was probably 10-15w. The transmitted signal was monitored on Sony ICF-SW7600G with fully collapsed antenna.

Receiver - Elecraft K2 and 135' ladderline-fed doublet. While transmitting, the K2 AF and RF gains were turned all the way down.

The transmitter's built-in key felt surprisingly good for such short-coupled design. I adjusted the gap but not tension.

Transmitter tuning indication is via lamps. It's possible to tune for maximum brightness but produce a chirpy transmitted signal. A very pure note can be achieved by adjusting "Exciter" and "Pwr Amp" while listening to a monitor-receiver.

Copy was rough. Jim is a CW man and prefers a hand-key but says hand keys are difficult to use in contests.

Buddy has been a ham for almost 55 years. He is active in NTS, especially in the VA CW net.

Buddy got started in ham radio in 1952. He received his present callsign in 1976; the only prior holder of the call was his dad who received the call in 1930.

For this QSO, I was running my Elecraft K2 at 5w into the doublet and was using my older Speed-X model 310.

Buddy complimented me on my fist. He also has a Speed-X.

Steve has been a ham for 41 years. He had to QRT early this evening because of approaching thunderstorm.

Copy was rough. Mike might have been running a home-brew 40w transmitter into a loop at 80ft.

Rod was running a Drake C-Line at 150w into a Carolina Windom at about 50' and was keying with a Bencher RJ-2 straight key.

For this QSO I was running my Elecraft K2 at 5w into the doublet and was using the my older Speed-X model 310.

Copy was rough. Bert was running an FT-something into a dipole.

Bob reported that the temperature at his QTH was 16°F; Athens was at 55°F.

Bob does some QRP on 40m with a home-brew tube transmitter and receives with a Heath HR-10. Bob reports that the HR-10 is "not the best receiver out there" but he likes his.

Mike was running his HW-16/HG-10 with just a slight chirp.

Ralph spent some years at OU and Athens is one of his favorite places. Rig was a two-tube transmitter built from 1968 QST article by W1TS with 4-watts out into end-fed half-wave at 20ft. Ralph used a Swedish pump straight key. Ralph is 70 years old and has been licensed for 53 years.

Ralph's fist was probably the best straight-key fist I heard during SKN.

Ralph sent a beautiful QSL card (front | rear) and photo of his transmitter.