Strouds Run State Park is located in the scenic forested hills of Athens County, in the midst of the unglaciated Appalachian Plateau. Although untouched by the vast ice sheets that moved across portions of the state over 12,000 years ago, the effects of the glaciers can be seen today in the deep ravines and high hills of Strouds Run. Stream valleys served as outlets for torrents of glacial meltwaters. The erosion power of these waters began carving valleys and hillsides into the familiar topography Ohioans know today. Large deposits of glacial outwash, primarily sand and gravel, were deposited along these streams and strongly affected the type of biological communities present today at the park.

Sandstone, the principal bedrock outcropping in the region, is very resistant to erosion and forms the uplands and steep sides of the valleys. Twisting roads and forest trails pass through these deep ravines and lead to dense stands of beech, hickory, oak, maple and tuliptree. Seasonal displays are offered by flowering dogwood, redbud and spring wildflowers—with fall presenting a pageant of colorful foliage. These woods are home to white-tailed deer, fox, raccoon, opossum, squirrel, wild turkey, and a variety of songbirds. Woodthrush, white-breasted nuthatch, scarlet tanager, pileated woodpecker, and the rufous-sided towhee inhabit the forest canopy. These rugged hills and woodlands are truly reminiscent of the wilderness that characterized the Ohio country in the days of early settlers. 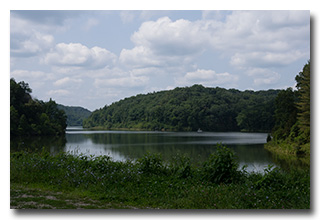 Eric, Josh, and Theo arrived at Dow Lake Dam about 1700 UTC and hiked to the top of the earthen dam where they decided to follow a trail down toward the water and set up stations on a small beach at the water's edge. Josh carried everything he needed in a single backpack. Much of Eric's station fit into a single backpack but he hand-carried his 20' Black Widow telescoping pole and his new Harbor Freight "Folding Aluminum Sports Chair" (link), while also trying to keep a hold on Theo's leash. Fortunately, neither Eric nor Josh fell during any of the hiking although Eric did get stung by some unknown creature while trying to untangle Theo's leash from a bush. 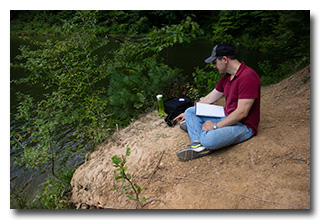 Josh was first to get his station set up. His station consisted of his FX-9A transceiver and an N2CX-inspired 20/30/40m field vertical supported by a lighweight and small 17' carbon-fiber telescoping pole lashed to a bit of tree-stump. Eric's station took a bit longer to set up and consisted of his Elecraft KX3 and N2CX-inspired field vertical supported by his Black Widow pole mounted on a spike stuck into the sand.

Josh and Eric both made their first QSOs at just about 1730 UTC. With their stations in very close proximity, neither Josh nor Eric were surprised that their radios interfered with each other even when operations were on different bands. In addition, both operators found stations to be rare and weak.

After about a half-hour of mediocre results, Josh decided to relocate his station to a higher point and Eric followed a few minutes later. Josh found a nice location along the trail leading from the top of the earthen dam. Eric chose a point atop the earthen dam and also took the opportunity to return to the car to fetch the NPOTA-proven 28½' end-fed wire, MFJ-1910 telescoping mast, and tripod to deploy in place of the N2CX-inspired tri-band wire vertical antenna. Josh's and Eric's new locations in the clear were more than far enough apart that neither transmitter bothered the other operator.

Eric found QSOs easier to find and make at the new location with the longer wire but he's unable to say if the improvement came from the longer antenna, from the second location, or from propagation changes during the time that elapsed between the tearing down of the station at the first location and the setting up of the station at the second location, or from some combination of the three. His gut feeling is the improvement came mostly from the 28½' wire and he plans to do more testing of the N2CX-inspired tri-band wire vertical.

Their stations being set up on well-traveled hiking paths, both Josh and Eric found their second locations to be good for interacting with passers-by, and they happily explained the hobby and the activity to all who expressed interest.

Both operators enjoyed the 2018 Skeeter Hunt and is looking forward to participating again next year.