Bird Island is an undeveloped barrier island located at the southwestern edge of the North Carolina coast, situated between the Town of Sunset Beach and the Little River Inlet in South Carolina. The Reserve site encompasses 1,481 acres consisting of approximately 135 upland acres and over 1,300 acres of marsh, intertidal flats, and subtidal area. This site is also a Dedicated Nature Preserve, authorized by G.S. 143B-135.250. 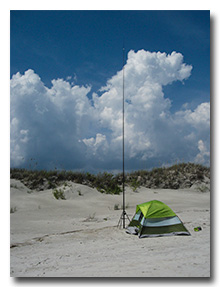 Eric and his family were vacationing on Ocean Isle Beach, NC, and when Eric saw in the Skeeter Hunt rules the bonus for operating from a KFF/POTA (link) location, he checked the maps and found that nearest eligible KFF location was Bird Island Coastal Reserve (KFF-3850) on nearby Sunset Beach. Eric did what preparation he could before the trip to North Carolina using Google Maps and Google Maps Satellite View. The day before the event, Eric and Miles made the short trip to Bird Island to reconnoiter and choose a set-up location. While there, Eric spoke with locals who confirmed that erecting a tent and supporting a mast with stakes in the sand was permitted.

The Sunday day of the event was, not surprisingly, North Carolina hot and humid. All four of the McFaddens made the short drive from Ocean Isle to Sunset Beach and then made the half-mile walk from the parking spot to the edge of the Bird Island Coastal Reserve, with Miles and Eric carrying the Enhanced KX3 Travel Kit, the MFJ-1910 33' mast and tripod, a small tent, two chairs, water bottles, and a clipboard. Making sure the chosen location was well inside the borders of the Sanctuary, Eric and Miles set up the tent, erected the mast and hung the 28-1/2' end-fed wire antenna, and deployed the station while Eric's wife and daughter searched for shells and sunbathed.

Eric had wanted to operate in the tent for two reasons: to avoid sunburn and to protect the KX3 from the salty, wind-driven sea air. The little Adventuridge tent served well and was large enough for Eric and Miles to sit in on the chairs with the KX3 deployed on the tent floor at Eric's feet. Unfortunately, even with well-designed ventilation, the tent quickly got hot enough inside that Eric found himself dripping sweat all over his logsheets and CW copy paper. However, Eric soldiered on and made eleven Skeeter Hunt QSOs, enough QSOs to qualify for a valid KFF/POTA activation of Bird Island Coastal Reserve (KFF-3850).

Eric started operating on 20m and his first QSO was with WO9B at 1803 UTC. Eric found a frequency and began to run a frequency and made four more QSOs on 20m over the following fourteen minutes. Eric then changed to 40m and ran a frequency there. His first QSO on 40m was with KI4MZC at 1825 UTC. Primarily because of the heat and the prospect of the long, heavily-laden, walk back to the car, Eric and Miles tore down after Eric's final QSO at 1846 UTc.

Eric was pleased that two of his QSOs were park-to-park.

Eric enjoyed the 2017 Skeeter Hunt and is looking forward to participating again next year.

UPDATE: In 2018, WWFF retroactively required KFF activations to have the same 44 QSOs other WWFF organizations are required to have for a valid activation. This means Eric's activation is no longer valid within WWFF unless/until he can return a and make 33 additional QSOs.