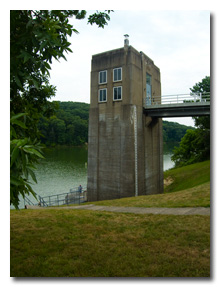 Eric and Vickie arrived at Tom Jenkins Dam about an hour into the four-hour event and set up Eric's KX3 Travel Kit on a table in the picnic shelter. He and Vickie quickly hung the 28' end-fed wire from a suitable tree and made his first QSO on 20m with AD0AB at 1811Z.

A solar K-index of 3 caused very poor band conditions on 20m and 40m. Most Skeeter Hunt stations were weak and QSB was very fast and deep. In addition, the SKCC (link) Weekend Sprint (WES) was taking place right on the 20m QRP calling frequency, causing QRM.

Eric operated about 90 minutes and managed to work twelve stations on 20m and two stations on 40m.

Eric enjoyed the 2015 Skeeter Hunt and is looking forward to participating again next year.