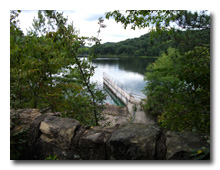 Eric and Miles arrived at Lake Hope about an hour into the four-hour event and set up Eric's KX3 Travel Kit on the same picnic table Eric used last year. He and Miles quickly hung the 28' end-fed wire from a suitable tree and made his first QSO on 20m with KX0R at 1824Z. (KX0R was Eric's first QSO at last year's event, too.)

In the 50 minutes (or so) Eric had to operate before the rain arrived, Eric managed QSOs with five numbered Skeeter Hunt participants on 20m and he worked one non-Skeeter on 40m.

Eric enjoyed the 2014 Skeeter Hunt and is looking forward to participating again next year.

Unfortunately, Eric managed to drive over his Yaesu FT-60R HT while leaving Lake Hope. The result was not very pretty (photos: 1 | 2 | 3).