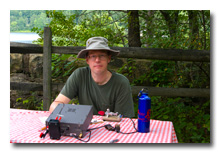 Eric had hoped to find an available picnic table near the Lake Hope State Park Nature Center but none were available; Eric spent the first hour of his available operating-time exploring the Nature Center with his family. Returning to Lake Hope beach area, Eric found an available table with a nice view overlooking the lake and quickly hung his 44' broadside-doublet from a tree overhanging the table and made his first QSO on 20m with KX0R at 1947Z using his K2 Travel Kit.

In the 75 minutes Eric had to operate before the event ended, Eric managed QSOs with five Skeeter Hunt participants. All contacts were on 20m and all stations worked had Skeeter Numbers. The final three QSOs were the result of Eric calling CQ.

Eric enjoyed the 2013 Skeeter Hunt and is looking forward to participating again next year.