Neither Eric nor Drew had planned to make many contacts during this event. Rather, each used the time and availability of stations to fine-tune their stations. Eric, after his disappointment with his KX1's receiver during the 2012 Flight of the Bumblebees, concentrated on learning how to properly operate the KX1 and compared his minimal field antenna to a "real" antenna. Drew used his Elecraft KX3 to test a pair of HF mobile antennas in preparation for an upcoming trip to Michigan.

Eric and Drew arrived at the park about 12:30pm, finding the picnic shelter to be available. Eric used the ACARA's EZ Hang sling-shot antenna-launcher to easily hang his his 28' end-fed wire antenna and his 44' broadside-doublet from convenient trees. Eric set up both his K2 Travel Kit and his KX1 Mini Travel Kit and commenced operations with his KX1 about 1:30pm. Drew began operating from his mobile station shortly thereafter.

As at the 2012 Flight of the Bumblebees, Eric powered the KX1 with a battery-pack made of ten AA NiMH cells that provided about 13vdc (photo) and, as before, this pack worked very well. The KX1's built-in autotuner easily tuned the 44' broadside-doublet on 20m and 40m without the need for a balun.

At the 2012 Flight of the Bumblebees, Eric had encountered significant trouble zero-beating other stations and had noted that the AF gain had to be run nearly wide-open. This time, Eric found that by closing the KX1's IF filter down to 700Hz or less helped tremendously in allowing him to properly tune in other stations. Eric also found that extremely strong signals could blow past the IF filter, allowing the signal to appear on both sides of zero-beat; once he recognized what was going on, he was able to properly tune in even these very strong signals. Drew confirmed that both KX1s he has owned were low in audio-output and are very sensitive to headphone/earbud impedence; Eric did find that better band conditions and the larger antenna helped make copy easier than at the previous event. Eric is now confident that the KX1 will serve him well for his human-powered-transport field operations. 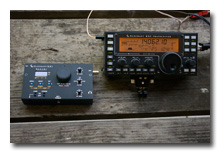 Eric took the opportunity to let Drew show him his new Elecraft KX3. Drew explained that the KX3 is effectively a single-receiver K3/10 in a smaller package which, for Drew's needs, is almost too much rig for Drew's trail-friendly-radio needs. (Indeed, Drew is thinking of building himself another KX1 for hiking.) The KX3 appears to be an excellent rig although it appears to have a few rough edges yet. The main problem Eric noted was occasional very bad audio distortion of very strong signals. Drew feels this is caused by overload of the ADC and is inherent in the basic architecture of this software-designed-radio. UPDATE 1: The day after the event, Drew discovered that the most recent KX3 firmware update had implemented new AGC adjustment parameters which had been set to seemingly arbitrary values. After spending time with the manual, Drew was able to determine correct values for these parameters and reports that his KX3 now displays proper AGC behavior and no longer exhibits any ADC-overload distortion. UPDATE 2: Drew has built himself another KX1.

Eric also took the opportunity to play with Drew's YouKits HB-1B trail-friendly-radio and was very impressed with the performance and audio quality of the receiver and the useful display. (He was less keen on the single CQ-only keyer memory and the lack of an available internal antenna tuner.)

Eric made a total of six QSOs, three on 20m and three on 40m. Stations were worked in CO, IL, MA, NC, VA, and WI, All QSOs were made with the KX1 and 44' broadside-doublet. All QSOs were made using the Whiterook MK-22 Pocket Mini CW Key. Eric calculated his score to be 216 points.

Eric enjoyed the 2012 Skeeter Hunt and is looking forward participating again next year.

UPDATE 2: In November Eric received a certificate for Top Ohio Finish in the 2012 NJQRP Skeeter Hunt. (Since there were no other entrants from the 8th call-district, Eric might well have been the only entrant from Ohio.)