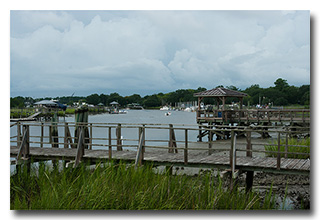 Two members of the Southeast Ohio Radio Adventure Team participated in the 2017 Solar Eclipse QSO Party (link), an operating event sponsored by HamSCI (link) and the ARRL (link). The Solar Eclipse QSO Party was "citizen science" aimed at generating data to study ionospheric changes during the eclipse. Eric McFadden, WD8RIF, and Miles McFadden, KD8KNC, operated the event in the waterfront park in McClellanville, South Carolina, in the band of totality. Eric operated as WD8RIF/4. Miles didn't operate but helped with schlepping, set-up, and tear-down.

The McFadden family had scheduled a week-long beach vacation in coastal North Carolina in order to be close the band of totality during the 2017 total solar eclipse. The original plan was to witness the eclipse and operate the QSO Party at the Buck Hall Campground in South Carolina and the McFaddens left their beachfront cottage rental more than four hours in advance of the eclipse for the ninety-minute drive to Buck Hall. However, upon arrival, Buck Hollow Campground was found to already be at capacity. The McFaddens turned back and explored the nearby small town of McClellanville, SC, and found people gathering at the town park and boat-landing at the junction of the Intercoastal Waterway and Jeremy Creek. Parking for the family van was found in a location that would have almost certainly resulted in a ticket or a tow on any day other than the day of a total solar eclipse and space was found in the park to stake a claim. 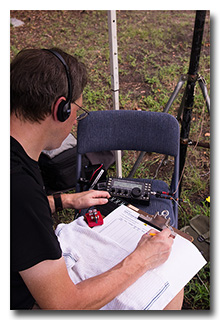 In order to protect all four McFaddens from sunburn during the wait for totality, Eric and Miles erected an E-Z Up tent after which they deployed Eric's proven Enhanced KX3 Travel Kit and MFJ-1910 33' fiberglass mast. Eric's station consisted of his Elecraft KX3, his 28-1/2' end-fed vertical wire supported by the fiberglass mast, and three counterpoise wires on the ground. Eric operated CW with an output power of 5-watts, keying the KX3 with a Whiterook MK-33 single-lever paddle.

Eric was operating in grid square FM03gb but in his QSO exchange he sent FM03fa, the location of Buck Hall Campground. He reported the correct grid square in his submission to HamSCI.

Eric started operating on 40m and his first QSO came at 1432 UTC with KY4L. Eric made twenty QSOs on 40m and 20m before pausing to watch and photograph totality and made an additional two QSOs on 20m following the end of totality, for a total of 22 QSOs. All but one of these QSOs was search-and-pounce. Eric did make several "CQ" calls on both bands in the hope of being spotted by the Reverse Beacon Network (link) but he remained steadfastly un-spotted.

As for the eclipse itself, the sky remained on-and-off cloudy through almost the entire initial and ending phases of the eclipse but almost miraculously, the sky around the sun cleared for several minutes bracketing totality. Eric attempted to photograph the initial phase of the eclipse and totality but, unfortunately, missed photographing both instances of the "diamond ring". 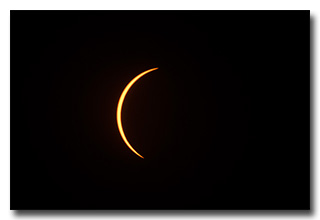 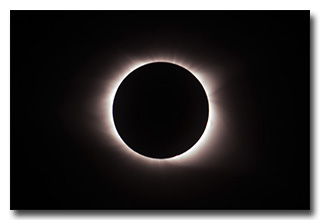 Eric is looking forward to experiencing the total solar eclipse of April 8, 2024, which will provide a band of totality that sweeps over the north-western half of Ohio, very close to his home QTH. If HamSCI sponsors a 2024 Solar Eclipse QSO Party, Eric is very likely to participate.