Two members of the Southeast Ohio Radio Adventure Team participated in the 2018 QRP to the Field operating event. Eric McFadden, WD8RIF, and Josh Cash, KE8EAS, operated on the banks of the Hocking River in Athens, Ohio. 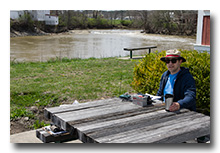 This year's theme for the event was "A River Runs Through It" and participants were encouraged to operate on or near a waterway. The team's chosen location was the Habitat for Humanity House, right on the east bank of the Hocking River, with a nice view of the historic White's Mill on the other side of the river.

After what had begun to feel like an endless winter, the weather for this event was about perfect for outdoor radio—partly sunny, a light breeze, and a temperature about 60°.

Josh arrived at the site about 1730 UTC, prior to Eric's arrival, chose the square picnic table next to the Habitat House for his operation, set up his Buddipole antenna system, and began operating 40m CW with his FX-9A transceiver. Partway through his operation, Josh took down the Buddipole and switched to his new N2CX-inspired QRPGuys Portable 40-30-20m Tri-Band Vertical Antenna (info), which worked well for him on both 20m and 40m. 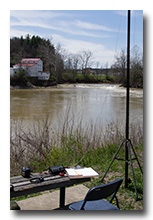 Eric arrived about 1800 UTC, selected an available bench facing the river for his operating location, and set up his Enhanced KX3 Travel Kit, using for an antenna his standard 28-½' end-fed wire supported by the MFJ-1910 fiberglass mast. Surprisingly, this antenna system, which had proven itself through numerous National Parks on the Air activations throughout 2016, couldn't be matched on 20m with the KX3's internal antenna tuner. Fortunately, the addition of a 4:1 balun between the rig and the antenna solved this problem and Eric was able to use the antenna on both 20m and 40m. Eric's rig for this event was his Elecraft KX3.

Josh and Eric found band conditions to be awful due to the lingering effects of a G2 geomagnetic storm the previous day. Josh and Eric each worked only two QRP to the Field participants—each other on 40m, and WB5BKL in Texas on 20m. The rest of their QSOs were with a mix of stations participating in the Ontario QSO Party, Michigan QSO Party, International Marconi Day special event, and the MM-DX Contest. By tear-down at about 2030 UTC, Josh had made a total of ten QSOs on 20m and 40m and Eric had made twelve QSOs on the same bands.

Josh's station, in particular, seemed to invite curiosity. Josh paused his operating several times to talk with passersby, twice with hams whom neither Josh nor Eric had met before, which is slightly unusual in a small town like Athens. One of the hams was from West Virginia and was Athens to bicycle on the Hockhocking-Adena Bikeway, which passes directly next to the Habitat House.