The Muskingum River, because of its size and location, has played an important role in Ohio's history. It remains the longest continually navigable river traversing Ohio, due to the series of locks and dams that date back to 1841. West Point graduate Major Samuel Curtis designed a system of 10 dams and 11 locks to connect the Muskingum River to the Ohio and Erie Canal at Dresden. The system provided navigable waterways from Marietta to Lake Erie. In its day, the system of locks and dams that extends 112 miles through southeastern Ohio, helped open the state and the entire Midwest to trade and development. Today, it serves the needs of more than 7,000 recreational boaters each year who come to fish, picnic and play in the scenic Muskingum Valley. — from the park website 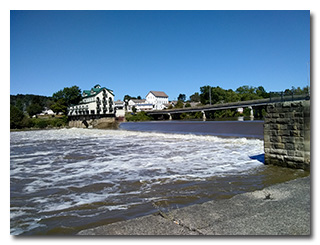 One member of the Southeast Ohio Radio Adventure Team participated in the 2018 running of the New England QRP Club's "QRP Afield" event. Eric McFadden, WD8RIF, took the opportunity to simultaneously attempt an activation of Muskingum River State Park (KFF-3520 / K-3520) for the World Wide Fauna & Flora in Amateur Radio (WWFF) (link and Parks on the Air (POTA) (link) at Lock and Dam #6 in Stockport, Ohio. Eric was joined by his wife Vickie and their two small dogs, Theo and Mindy.

After identifying himself to the park staff-member on-site, Eric set up his Enhanced KX3 Travel Kit and 28½' wire supported on his 33' MFJ-1910 fiberglass mast. Eric was on the air by 1635 UTC.

Eric immediately found that 40m was almost unusable due to a strong digital hash covering the entire CW end of the band; this noise peaked at about 7.045MHz and remained the whole period Eric was on-site. Due to this noise, Eric concentrated on 20m and made only one QSO on 40m late in the event.

Several operating events took place over the same time period as QRP Afield—New Jersy QSO Party, Iowa QSO Party, and Washington Salmon Run, among others—so Eric had expected to have no trouble making the ten QSO required to have a valid POTA activation. However, with 40m out of play for Eric, he heard stations participating in the New Jersey or Iowa QSO Parties and heard only three stations participating in QRP Afield.

It was the Salmon Run that allowed Eric to make his required ten QSOs. In fact, nine of the thirteen QSOs Eric made were with stations in Washington participating in the Washington Salmon Run.

Eric's one QSO on 40m was with N2CX, Joe, who was simultaneously participating in QRP Afield and activating KFF-16335 / K-1635, Washington Rock State Park, New Jersy. The noise level was so bad at Eric's location he had to ask Joe to repeat his exchange in order to complete the QSO.

In addition to the nine Salmon Run stations and the one QRP Afield station, Eric worked two stations in Texas and one in Oklahoma. Late during Eric's participation, he heard two QRP Afield stations calling CQ but he was unable to complete a QSO with either of them.

Eric was disappointed in not working—or even hearing—more QRP Afield stations but he was pleased he was able to perform a valid POTA activation of Muskingum River State Park. If he decides to try to complete a WWFF activation, which requires 44 QSOs, he has ten other lock and dam locations to choose from for subsequent operations.