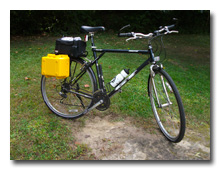 Eric McFadden, WD8RIF, spent a couple of afternoon hours participating in the 20th-Anniversary running of the NE QRP Club QRP Afield contest at Highland Park in Athens, Ohio, with his KX3 Travel Kit. Eric was joined for part of this by Ted Jacobson, W8KVK, and Vickie McFadden, KC8MAJ, neither of whom operated.

Eric bicycled from his home south of Athens to Highland Park for the event, a hilly round-trip ride of 12 miles. Eric carried his KX3 Travel Kit and his FT-60R dual-band handheld on the bicycle. In the interest of reducing weight, Eric had chosen not to mount a pannier on the bicycle so all additional items had to fit in or on the bicycle's rear-rack trunk-box.

The weather was very pleasant for an event of this nature: sunny skies with puffy clouds, a light breeze, and a temperature around in the mid- to upper-70s. 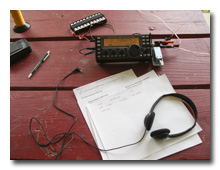 Eric arrived at the park about 12:10pm, finding the picnic shelter to be unoccupied. He quickly set up the KX3 Travel Kit, throwing a line over a small tree using a metal throwing-weight, pulling his 28' end-fed wire up, and deploying the two counterpoise wires. (He lost a throwing-weight in his first attempt at throwing a line over the tree; this weight steadfastly refused to be found despite the efforts of Ted, Vickie, and Eric to find it throughout the afternoon.) The KXAT3 antenna tuner in the KX3 had no trouble matching the 28' end-fed wire on 20 or 40m. Eric powered the KX3 with his ten-cell Eneloop pack. Eric keyed the KX3 with his American Morse Equipment Mini-B single-lever paddle mounted to the side of the KX3.

Eric tore down the station about 3pm. He chose to allow his wife, Vickie, carry the KX3 Travel Kit home in the automobile; he bicycled home, "light", which made the hill-climbs a bit easier.