Wyandot Wildlife Area is a 336-acre state wildlife area located 1 mile south of Carey. The property is in Wyandot county. 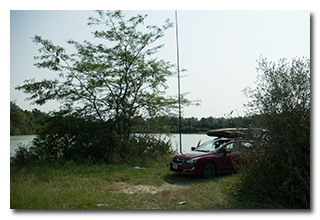 On Sunday, September 12, 2021, while enroute home from the Findlay Hamfest, two members of the Southeast Ohio Radio Adventure Team performed a successful activation of Wyandot Wildlife Area in Ohio as part of the Parks on the Air (POTA; link) program. 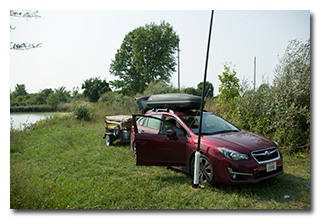 Eric and Miles arrived at the empty parking area at 1915 UTC, finding it to be smaller and more deeply rutted than Eric had anticipated based on Google satellite imagery. Miles carefully backed his car and utility trailer into the parking area and oriented the car to maximize shade inside the car. Eric and Miles quickly deployed the 28½' wire antenna on the 31' Jackite telescoping fiberglass mast and drive-on base and set up the KX3 inside the car. Eric was on the air at 1927 UTC. (It wasn't until later that they realized that they had driven past the "No Vehicles Beyond This Point" sign that was hidden in the foliage.) 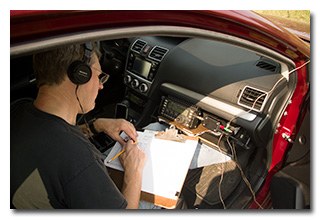 Eric began operations on 80m and his first QSO came at 1936 UTC with K3ES in Pennsylvania.

Eric called CQ on 30m for several minutes but no QSOs were made on that band.

In all, Eric made sixteen QSOs in just under half an hour. All of Eric's QSOs were CW and were made with five watts output.

Miles didn't operate but helped with navigation, helped with set-up and tear-down, and did most of the activation photography.