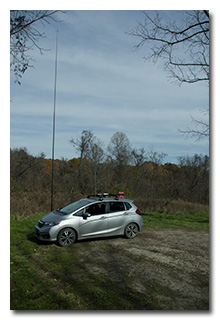 On Veterans Day, Thursday, November 11, 2021, one member of the Southeast Ohio Radio Adventure Team performed a successful activation of Wolf Creek Wildlife Area in Ohio as part of the Parks on the Air (POTA; link) program.

Eric, Vickie, Mindy, and Theo arrived at the Wolf Creek Wildlife Area access area at 1645 UTC to find the parking area to be unoccupied. Eric and Vickie quickly deployed Eric's 28½' wire antenna on the 31' Jackite telescoping fiberglass mast and drive-on base. Eric set up the KX3 inside the car and was on the air at 1651 UTC.

Eric was not surprised to find he had only very poor cell-signal at his location. Anticipating this, Eric had announced his upcoming activation on POTA Spots (link) before leaving home in hopes that POTA Spots would spot him upon seeing his spotted on the Reverse Beacon Network (RBN). Eric had also alerted his friends K8RAT and K4SWL of the upcoming activation, so they could watch RBN, as well. Eric was pleased to discover that he had just enough cell signal to send a text to K8RAT and K4SWL with his starting frequency for spotting support. 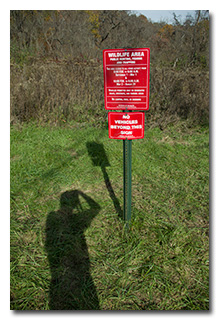 Eric began operations on 80m and his first QSO came at 1653 UTC with WB3AVD in Pennsylvania. This was followed at 1655 UTC with a QSO with K8RAT in north-central Ohio.

Switching to 20m at 1716 UTC, Eric's first QSO there came at 1719 UTC with NM5S who was operating mobile in New Mexico. QSOs came steadily on 20m, with Eric's sixth QSO on that band coming at 1728 UTC with K7GT in Oregon.

In all, Eric made twenty-eight QSOs in about thirty minutes. All of Eric's QSOs were CW and were made with five watts output.