The 6,696-acre Wallace O'Dowd Wildlife Area includes the former Trimble Wildlife Area and the Sunday Creek Wildlife Area. The area is located in Athens County and Hocking County near the Wayne National Forest and the Trimble Township Community Forest. 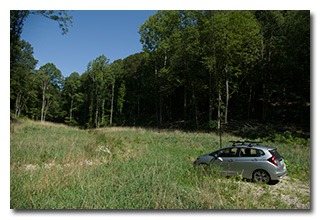 On Friday, September 3, 2021, one member of the Southeast Ohio Radio Adventure Team performed a successful impromptu activation of Wallace H. O'Dowd Wildlife Area in Ohio as part of the Parks on the Air (POTA; link) program.

Eric had identified several possible operating locations off of Jobs New Pittsburgh Road and checked out five of them before choosing to set up at the last one. Several of the identified operating locations were made less than ideal due to power lines passing right over the parking areas. However, while the final one was more overgrown than it had appeared to be on Google Maps satellite imagery, it was free of power lines and worked well for the activation. Eric arrived at this location at about 1825 UTC, parked as well as he could to put the car's passenger side in the shade, and quickly deployed his 28½' wire antenna on the 31' Jackite telescoping fiberglass mast and drive-on base. Because of a desire to avoid the direct sun, Eric chose to set up the KX3 inside the car. Eric was on the air at 1832 UTC. 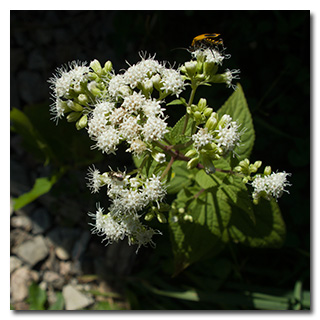 Eric was not at all surprised to find he had no cell signal at any of the possible operating locations. Because he had anticipated having no cell signal, Eric had announced his activation on POTA Spots so that when he was picked up on the Reverse Beacon Network (RBN, link) he would be spotted on POTA Spots (link) by algorithm. Eric had also asked his friend K8RAT and K4SWL to watch RBN and to spot him on POTA Spots if the algorithm wasn't working.

Just about the time was driving out of cell signal, he received a text from K8RAT that 40m had just experienced a total blackout but propagation might recover within a hour. With this news to cheer him up, and even though the best antenna-match his KX3 could find on this band was 2.5:1, Eric began operations on 80m and called "CQ POTA" in the hopes that he would be spotted on POTA Spots. Apparently, the algorithm worked because shortly after he began calling "CQ", Eric could hear K8RAT calling him. Unfortunately, Mike couldn't hear Eric, so no QSO was made. It seems no one else on 80m could hear Eric, either, and ten minutes of calling CQ netted no QSOs. 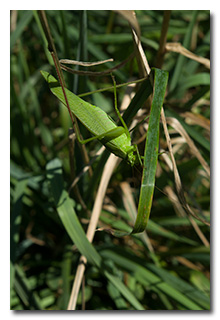 Switching to 40m at 1842 UTC, Eric surprised to find an S3 "buzzing" noise floor, which he mitigated as well as he could by using the KX3's DSP Noise Reduction (NR) and DSP Noise Blanker (NB) functionality. (Eric was later able to confirm that this noise was not local but was atmospheric, a sympton of the flare that had blacked out 40m earlier.) Eric found a frequency and began calling "CQ POTA" and it seems the algorithm worked to spot Eric to POTA Spots because Eric's first QSO on 40m came at 1848 UTC with N4HID in Kentucky. QSOs came steadily, if slowly, with Eric's twelfth QSO coming at 1906 UTC with N4ARY in Georgia.

Upon switching to 30m at 1907 UTC, Eric found the same buzzy noise floor and reduced it as well as he could with DSP NR and DSP NB. Eric's first QSO on 30m came at 1910 UTC with K2WO in Florida. Eric's fifth QSO on 30m came five minutes later at 1915 UTC with KO4SB in Alabama, a station that Eric had also worked earlier on 40m. After four unproductive minutes of calling CQ, Eric switched to 20m at 1919 UTC.

On 20m, Eric found the same buzzy noise floor, but it wasn't quite as loud and DSP NR and DSP NB were more successful in reducing it significantly. However, ten minutes of calling CQ netted Eric only QSO on 20m. The sole 20m QSO came at 1921 UTC with WK8S in Colorado.

In all, Eric made seventeen QSOs. All of Eric's QSOs were CW and were made with five watts output.

Throughout the operation Eric had to cope with bugs in the car: a yellow-jacket, some horse flies, and even biting "no-see-ums". Fortunately, the yellow-jacket didn't sting and horse flies didn't bit. However, the biting no-see-ums did bite.