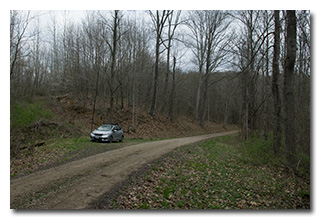 On Saturday, April 16, 2022, one member of the Southeast Ohio Radio Adventure Team (SEORAT) performed a successful activation of Turkey Ridge Wildlife Area in Ohio as part of the Parks on the Air (POTA; link) program.

Eric McFadden, WD8RIF, visited Turkey Ridge Wildlife Area on Bolster Hollow Road on a quickly warming but overcast Spring day following a trip to McArthur to attend a Vinton County Amateur Radio Club meeting. This was the third CW POTA activation of Turkey Ridge Wildlife Area, the first two being Eric's prior activations of this unit. As at his previous activations of this unit, Eric chose to perform this activation on Bolster Hollow Road, a road formerly used as an SCCA Pro Rally stage road in the Sunriser 400 Pro Rally. Eric was accompanied in-caravan by Kirk Groeneveld, KC8JRV, who had also attended the Vinton County meeting and had expressed a desire to see how Eric deployed his station. 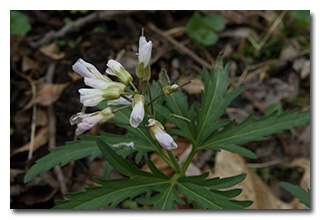 Eric and Kirk arrived at the operating location on Bolster Hollow Road at about 1500 UTC. Eric quickly deployed the 28½' wire antenna on the 31' Jackite telescoping fiberglass mast and drive-on base and, because of the threat of rain, set up the KX3 inside the car. After seeing how Eric deployed his station, Kirk had to depart. Eric was on the air at 1508 UTC.

As at his previous activations of this unit, Eric had only minimal cell-signal at the operating location, enough to send text-messages but not to reliably spot himself on POTA Spots (link) but he could, with patience, use POTA Spots to look for park-to-park (P2P) opportunities. 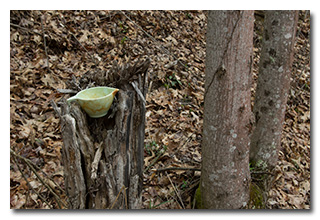 Finding a frequency to run on 40m, Eric began calling "CQ POTA" and managed to successfully spot himself on POTA Spots. His first QSO in this run came at 1523 UTC with WA4RCW in Tennessee. QSOs came quickly, with Eric's tenth QSO in this run coming at 1532 UTC with K4CAE in South Carolina. This run included a QSO with Eric's good friend K8RAT in central Ohio and QSOs with operators located in Tennessee, Ohio (2), Virginia, North Carolina, Georgia, New York, Ontario, Pennsylvania, and South Carolina.

Switching to 20m, Eric found a frequency to run, began calling "CQ POTA", and had to resort to asking his friend K8RAT via text to update his spot to show the new frequency. Eric's first QSO in this run came at 1536 UTC with KC1MXB in Maine. QSOs came steadily, with Eric's eleventh QSO in this run coming at 1549 UTC with KB4VU in Florida. This run included a P2P QSO with K0BWR who was activating Pomona State Park (K-2348) in Kansas; a P2P QSO with KB4VU who was activating Estero Bay Preserve State Park (K-3617) in Florida; a challenging QSO with NA6MG who was performing a Summits on the Air activation; and QSOs with operators located in Maine, Oklahoma (2), California, Kansas (2), Florida (3), and Utah.

In all, Eric made twenty-seven QSOs in about an hour. All of Eric's QSOs were CW and were made with five watts output.