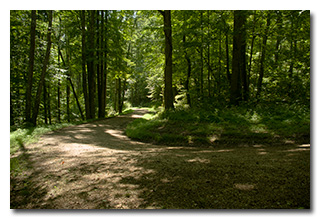 Being impatient to activate some of the many new POTA units that had been added in Ohio a few days earlier, Eric McFadden, WD8RIF, took a half-day of vacation on a beautiful sunny afternoon and first visited the nearby Turkey Ridge Wildlife Area and then the Fox Lake Wildlife Area. Eric was accompanied by the small dogs Theo and Mindy. 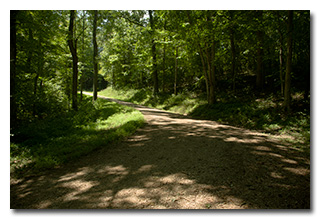 The 377-acre Turkey Ridge Wildlife Area has no trails, no trailheads, and no designated parking areas, and study of the maps and Google satellite imagery provide no real guidance on where one might set up and operate an amateur radio station. With little other recourse, Eric loaded his smartphone with the lat/long coordinates of where the two roads, Bolster Hollow Road and State Route 328, passed through or bordered the wildlife area, with the idea of driving the roads in the hope of finding a good pull-off. Having some familiarity with Bolster Hollow Road, a road that had been used as a special stage in the SCCA Sunriser 400 Pro Rally when Eric was involved in the event in the 1980s and early 1990s, Eric chose to drive this road first, having a vague suspicion he would find a suitable pull-off where Bolster Road makes a hairpin turn as it climbs its way toward the top of the ridge. Eric arrived at the hairpin turn at about 1650 UTC and found that there was, indeed, a wide pull-off at the hairpin. Eric parked his car on the pull-off and, while Theo and Mindy explored all the new scents, deployed his 28½' wire antenna on his 31' Jackite telescoping fiberglass mast and drive-on base. Because of the possibility of dust if other cars were to pass on the smooth gravel road, he set up his KX3 in his car. Eric was on the air at 1702 UTC. 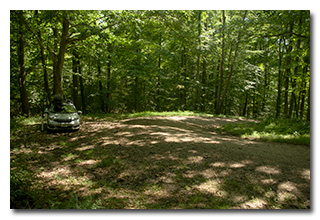 Eric had hoped to find cell-signal along the ridgetop in Turkey Ridge Wildlife Area and was pleased to find he had enough cell-signal to send and receive texts. Initially, he thought he had enough to access POTA Spots (link) and that he could spot himself and could look for park-to-park (P2P) QSO possibilities, but as the activation progressed, it became clear that access to POTA Spots was marginal at best. Because of the possibility of finding no cell-signal within the park, Eric had previously announced this activation on POTA Spots so that when his CW signal was heard by the Reverse Beacon Network (RBN, link), he would automatically be spotted to POTA Spots by algorithm. As a back-up, he had arranged to have his friend K8RAT watch the RBN and to spot Eric to POTA Spots when he saw Eric appear on RBN.

After getting the dogs back into the car, Eric began operations by finding a frequency on 80m, texting the frequency to K8RAT, and calling "CQ POTA". The spotting algorithm didn't work in this instance because the RBN didn't hear Eric's QRP 80m signal, but K8RAT spotted Eric to POTA Spots based on the text-message Eric had sent. Eric's first QSO came at 1708 UTC with AF8E in Ohio. Eric's second QSO came at 1711 UTC with K8RAT, also in Ohio. (Apparently, 80m propagation was changing, because upon receiving Eric's text, K8RAT hadn't been able to hear Eric, but by 1711 UTC, Eric had risen enough in signal strength that a QSO could be completed.)

Switching to 40m at 1712 UTC, Eric found a frequency, texted it to K8RAT, and began calling "CQ POTA". This time, the algorithm worked and Eric was automatically spotted to POTA Spots. Eric's first QSO on 40m came at 1715 UTC with WT3C in Maryland. His thirteenth QSO on 40m came sixteen minutes later at 1731 UTC with WB1DYR in Pennsylvania.

Switching to 30m, Eric found a frequency, texted it to K8RAT, and began calling "CQ POTA". Again, the algorithm worked and Eric was automatically spotted to POTA Spots. Despite being spotted, Eric had to call "CQ" for several minutes before receiving his first response. Eric's first QSO on 30m came at 1741 UTC with NT2A in New York. Eric's fifth QSO on 30m, and his final QSO overall, came at 1751 UTC with W0PWE in Iowa.

After tear-down, instead of taking the shortest route back to State Route 278, Eric chose to, instead, follow Bolster Hollow Road to Coalton Road and then down to SR278, to bring back some memories of Sunriser 400 Pro Rally.

In all, Eric made twenty QSOs. All of Eric's QSOs were CW and were made with five watts output.