This 2,779-acre wildlife area lies between State Route 60 and the Muskingum River, four miles north of Zanesville. County Road 49, which runs east from State Route 60, provides the best access to the heart of the area.

The topography includes gently rolling, reverting old fields and woodland. Seventy-six percent of the land is covered by woodland; of the total, 40 percent is in sawlog-size stands and 60 percent in pole-size stands. Brushland comprises 22 percent of the area. Less than one percent is open land. Approximately one-fifth of the area has been affected by earlier strip mining, leaving the terrain in a rough condition.

In the 1940s some of the spoil banks were planted to black locust and conifers which are now pole size. 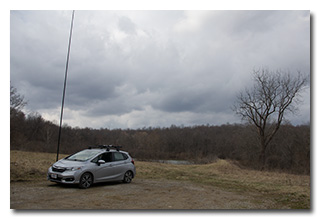 Following a drive of only 1.2 miles from Ellis Lock #11, the foursome arrived at the Powelson Wildlife Area parking area on Ellis Dam Road at about 1925 UTC. Eric quickly deployed his tried-and-true 28½' wire vertical on a Jackite 31' telescoping fiberglass mast and drive-on mount. Because of the wind and approaching weather, Eric set up his KX3 inside the car. Eric was on the air 1936 UTC. 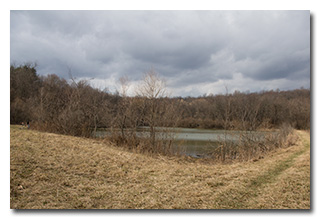 Eric was pleased to find he had good cell-signal at this location, and he was able to use POTA Spots (link) to identify possible park-to-park (P2P) QSO opportunities. Against the possibility of finding no cell-signal at the site, Eric had previously announced his activation on POTA Spots and had asked his friends K8RAT and K4SWL to watch for him to appear on the Reverse Beacon Network (RBN, link.)

Eric began operations on 40m by finding himself a frequency to run and calling "CQ POTA". Apparently, the POTA Spots automatic-spotting algorithm worked, because Eric began receiving replies to his calls before he was able to spot himself to POTA Spots. Eric's first QSO came at 1939 UTC with K9NUD in Illinois. QSOs came very quickly, with his twenty-ninth QSO coming at 2003 UTC with KD1CT in New Hampshire. This nice run included a P2P QSO with KN3A who was activating Samuel S Lewis State Park (K-1418) in Pennsylvania; QSOs with Eric's good friends K4SWL in western North Carolina and K8RAT in central Ohio; and QSOs with operators in Illinois (2), North Carolina (6), Ohio (3), Ontario, Michigan (3), Tennessee (3), Pennsylvania (2), Virginia (2), Massachusetts, West Virginia, Wisconsin, New Hampshire (2), New York, and Indiana. 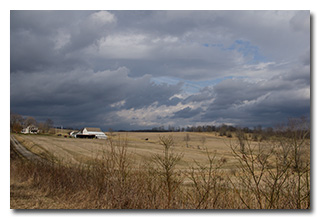 Switching to 20m, Eric found himself a frequency to run and began calling "CQ POTA". Again, POTA Spots automatically updated his spot and his first QSO on 20m came at 2005 UTC with KQ0E in Minnesota. QSOs again came quickly, with his ninth QSO in this run coming at 2016 UTC with AE5II in Texas. This run included QSOs with operators in Minnesota, Louisiana, Kansas, Idaho, Florida, Washington, New York, and Texas (2).

Eric finished his operation by checking POTA Spots for P2P QSO opportunities, and at 2020 UTC he made a P2P QSO on 40m with KQ4YC who was activating Caesar Creek Gorge State Nature Preserve (K-7847) in Ohio.

In all, Eric made thirty-one QSOs, including two P2P QSOs. All of Eric's QSOs were CW and were made with five watts output.

Update 2022-05-13: After learning that Powelson is now included in the program, Eric retroactively submitted his log to the World Wide Flora and Fauna in Amateur Radio (WWFF; link) program for KFF-5916.