The 200-acre wildlife area is located within Pickaway County, 3.5 miles east of Commercial Point and four miles north of South Bloomfield. It is adjacent to the Scioto River along its most western edge, and is bordered by an old feeder canal to the east which was once part of the Ohio and Erie canals system. The terrain is very flat and located within the Scioto River floodplain, which has resulted in very moist soils throughout the area. These moist soils support an array of unique plants, which are mainly located on the property north of State Route 762. Wet meadows, flooded wetlands, vernal pools, and patches of warm season prairie grasses are the primary habitats located north of State Route 762. Habitats south of State Route 762 include woodlots with vernal pools scattered throughout, riparian corridors, and openland. Cooperative farming, including rotational cool season grasses, controlled burning and native warm season grass plantings are used on this area as part of the wildlife management program. 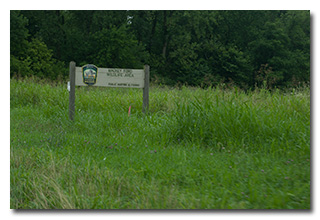 On Sunday, July 17, 2022, for the Parks on the Air program (POTA; link) Support Your Parks Summer 2022 Plaque Event, two members of the Southeast Ohio Radio Adventure Team performed a successful activation of Mackey Ford Wildlife Area in Ohio. This was the the second of three planned activations the pair were to undertake on this day.

Eric, Miles, and Theo arrived at Mackey Ford Wildlife Area at about 1810 UTC to find both available parking areas to be empty. Choosing to set up in the larger parking area near the Scioto River, and after a quick walk with Theo-dog, Eric and Miles deployed the 28½' wire vertical on a 31' Jackite telescoping fiberglass mast supported on a drive-on base. Because of the threat of rain and the very real problem caused by hordes of marauding mosquitoes, Eric set up his Elecraft KX3 inside the car and was on the air at 1823 UTC. 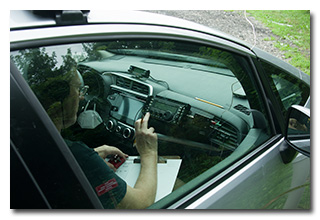 In order to give his friends K8RAT in central Ohio and K4SWL/VY2SW vacationing in Quebec the opportunity to work the park, Eric began his operation on 80m. Eric called CQ for several minutes but received no responses.

Finding himself a frequency on 40m to run, Eric spotted himself on POTA Spots and began to call CQ. Eric's first QSO in this run came at 1831 UTC with VA3IIF in Ontario. QSOs came quickly, with Eric's fifteenth QSO in this run coming at 1850 UTC with WI2A in New York. This run included a P2P QSO with KC5F who was activating Holmes Educational State Forest (K-4856) in North Carolina; a P2P QSO with K0BWR who was activating Leavenworth State Fishing Lake (K-7390) in Kansas; and QSOs with operators located in Ontario, North Carolina (3), New York (2), New Jersey (2), Pennsylvania, Tennessee, Wisconsin, Michigan, Maryland (2), and Kansas.

Eric finished his activation by checking POTA Spots for P2P QSO opportunities, and at 1853 UTC he completed a P2P QSO on 40m with W3GH who was activating Cook Forest State Park (K-1345) in Pennsylvania.

In all, Eric made seventeen QSOs, with four P2P QSOs, in just about half an hour. All of Eric's QSOs were CW and were made at the 5-watt level.