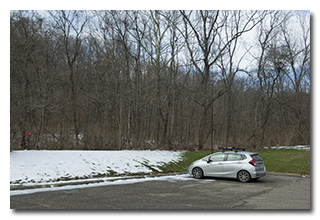 On Friday, February 11, 2022, one member of the Southeast Ohio Radio Adventure Team performed a successful activation of Fox Lake Wildlife Area in Ohio as part of the Parks on the Air (POTA; link) program.

Eric McFadden, WD8RIF, visited Fox Lake Wildlife Area on an unseasonably warm winter morning, arriving at the northern parking area at about 1545 UTC. Eric set up his 28½' wire vertical on his Jackite 31' telescoping fiberglass mast and drive-on mount and set up his KX3 inside the car. Eric was on the air at 1557 UTC.

Eric began his operation by using POTA Spots to identify possible P2P QSO opportunities and at 1600 UTC he made a P2P QSO on 20m with WC1N who was activating Lily Bay State Park (K-2394) in Maine. (Bob later told Eric via email that he has performed at least one POTA activation everyday since June, 2021. Here's his POTA website: http://www.ilovepota.com/.)

Checking POTA Spots for additional P2P QSO opportunities, at 1630 UTC Eric made a P2P QSO on 40m with AA9OM who was activating J. E. Roush Lake State Fish and Wildlife Area (K-4208) in Indiana, and at 1637 UTC he made a P2P QSO on 20m with AA5AD who was performing a two-fer activation of Jenkins Ferry State Park (K-1087) and Civil War Trail State Trail (K-7435) in Arkansas.

In all, Eric made thirty QSOs, including five P2P QSOs, in forty-one minutes. All of Eric's QSOs were CW and were made with five watts output.