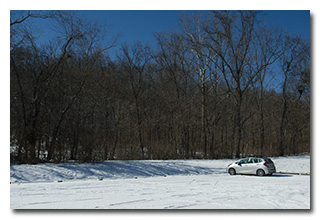 Eric McFadden, WD8RIF, visited Fox Lake Wildlife Area on beautiful, sunny morning with ice from Winter Storm Landon glistening in the trees like diamonds, arriving at the un-plowed northern parking area at about 1645 UTC. Eric set up his 28½' wire vertical on his Jackite 31' telescoping fiberglass mast and drive-on mount and he set up his KX3 inside the car. Eric was on the air at 1700 UTC.

Eric began his operation by using POTA Spots to identify possible P2P QSO opportunities and at 1700 UTC he made a P2P QSO on 17m with WD5GRW who was activating Eisenhower Birthplace State Historic Site (K-6553) in Texas. This was followed at 1704 UTC with a P2P QSO on 20m with N5BO who was activating Natural Bridge Battlefield State Park (K-3639) in Florida.

Eric found himself a frequency to run on 40m and began calling "CQ POTA". Eric's first QSO in this run came at 1708 UTC, even before he had finished his first "CQ", with his good friend K4SWL in western North Carolina. QSOs came quickly, with Eric's twenty-second QSO in this run coming at 1729 UTC with KA1DBE in Maine. This run included a P2P QSO with K0BWR who was activating Lewis and Clark State Park (K-1770) in Missouri, and QSOs with operators in North Carolina (3), Missouri (2), Ohio (2), Tennessee, New Jersey, Virginia (2), New York, Indiana (2), Pennsylvania (3), Maryland, Kentucky, Michigan, and Maine.

Wanting to get off the roads before the rising temperatures turned the snow on the roads to slickery slush, Eric chose not to continue this activation on other bands.

In all, Eric made twenty-four QSOs, including three P2P QSOs. All of Eric's QSOs were CW and were made with five watts output.