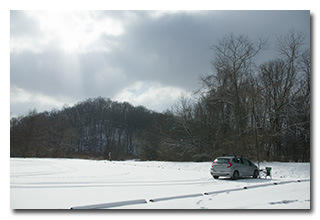 During a Level 2 Snow Emergency in the aftermath of Winter Storm Landon, Eric McFadden, WD8RIF, visited Fox Lake Wildlife Area to participate in the Arizona ScQRPions "Flight of the Bumblebees" (FYBO, info) field event, an event in which the temperature measured at the operator's key is inversely proportional to his contest score-multiplier.

After an uneventful drive on mostly-clear roads, Eric arrived at the Fox Lake Wildlife Area's un-plowed northern parking area at about 1535 UTC. Eric quickly set up his 28½' wire vertical on his Jackite 31' telescoping fiberglass mast and drive-on mount and, because he wanted to measure a low temperature at his key, he set up his KX3 on a folding camp-chair outside the car, at the base of the mast. Eric was on the air at 1544 UTC.

As at his prior activation of this park, Eric found he had good cell-signal at this location and he was able to verify his automatic spot on POTA Spots (link) and to use POTA Spots to identify possible park-to-park (P2P) QSO opportunities.

Eric's plan for this activation was to do a straight FYBO operation. He began operations by finding a frequency to run on 40m and began calling "CQ FYBO". Eric's first QSO came at 1547 UTC with AB4KN in Georgia. Eric's second QSO was a P2P QSO with K0BWR who was activating Perry State Wildlife Area (K-7941) in Kansas. QSOs came quickly, with Eric's fifteenth QSO coming at 1604 UTC with KC3RN in Pennsylvania. This run included a mix of QSOs with participants in FYBO and QSOs with POTA Hunters. The lowest temperature Eric recorded during this run was 27°F, earning him a x5 score-multiplier, and the lowest temperature he received from another operator participating in FYBO was 8°F reported by WD9F in Illinois. This run included QSOs with operators in Georgia, Kansas, Michigan, Virginia (2), Wisconsin, Illinois (2), New Jersy, South Carolina, Ohio (3), Pennsylvania (2), and Indiana.

Checking POTA Spots for P2P QSO opportunities, at 1605 UTC Eric made a P2P QSO on 40m with AA9OM who was activating Wilbur Wright State Fish and Wildlife Area (K-4232) in Indiana. Because of the cold temperature, and because Eric wanted to visit the nearby Waterloo Wildlife Area (K-8633) to continue his FYBO effort and for a POTA activation, he ended his operation at Fox Lake Wildlife Area following the QSO with AA9OM.

In all, Eric made sixteen QSOs, including two P2P QSOs, all on 40m. Because FYBO rules allow competitors to work any station for credit, all sixteen of Eric's QSOs count towards his FYBO score. All of Eric's QSOs were CW and were made with five watts output.