Coalton Wildlife Area is a 1760-acre state wildlife area located 1 mile west of Coalton. The property is in Jackson county. 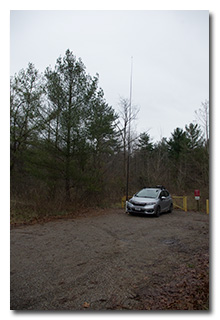 On Tuesday, December 28, 2021, one member of the Southeast Ohio Radio Adventure Team (SEORAT) performed a successful activation of Coalton Wildlife Area in Ohio as part of the Parks on the Air (POTA; link) program.

Eric McFadden, WD8RIF, visited Coalton Wildlife Area at the intersection of Raysville Road and Buffalo Skulls Road on gray, dreary, rainy afternoon. This was the third POTA activation of and the first CW POTA activation of Coalton Wildlife Area, the first-ever activations being a SSB activations performed by SEORAT-member Jeff Slattery, N8SUZ, on August 31, 2021 and September 28, 2021. Eric was accompanied by his small dog, Theo.

Eric and Theo arrived at the selected operating location at about 1530 UTC and Eric quickly deployed his 28½' wire antenna on the 31' Jackite telescoping fiberglass mast and drive-on base. Eric set up the KX3 inside the car and was on the air at 1541 UTC.

Eric began operations on 80m and his only QSO on that band came at 1545 UTC with his friend K8RAT in central Ohio.

Switching to 40m at 1547 UTC, Eric's first QSO there came at 1549 UTC K8RAT. This was followed in quick succession by QSOs with N3XLS in Pennsylvania, W4JL in North Carolina, and AE4Y in North Carolina.

Pausing to check POTA Spots for possible P2P QSOs, Eric made a P2P QSO at 1555 UTC on 40m with WB8ERJ who was activating Mohican-Memorial State Forest (K-5444) in Ohio.

Returning to running a frequency on 40m, QSOs came quickly, with Eric's twenty-third QSO coming at 1612 UTC with VE3VA in Ontario.

Finding his own frequency on 20m, Eric made eleven QSOs between 1631 and 1644 UTC. This run included a QSO with HA9RE in Hungary.

Pausing on final time to check POTA Spots for possible P2P QSOs, Eric made a P2P QSO at 1648 UTC with AB9PR who was activating Washington on the Brazos State Historic Site (K-3512) in Texas.

In all, Eric made thirty-eight QSOs in about sixty-seven minutes. All of Eric's QSOs were CW and were made with five watts output.