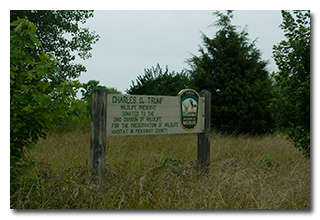 On Sunday, July 17, 2022, for the Parks on the Air program (POTA; link) Support Your Parks Summer 2022 Plaque Event, two members of the Southeast Ohio Radio Adventure Team performed a successful activation of Charles O. Trump Wildlife Area in Ohio. This was the the third of three planned activations the pair were to undertake on this day.

Eric, Miles, and Theo arrived at Charles O. Trump Wildlife Area at about 1930 UTC to find the parking area on SR-56 to be empty. Eric and Miles quickly deployed the 28½' wire vertical on a 31' Jackite telescoping fiberglass mast supported on a drive-on base. Because of the rain, Eric set up his Elecraft KX3 inside the car and was on the air at 1944 UTC. 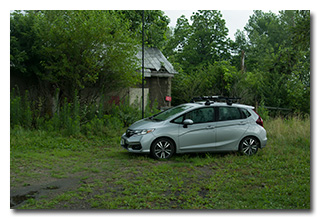 Eric began his operation on 80m in order to give his friends K8RAT in central Ohio and K4SWL/VY2SW vacationing in Quebec a chance to work the park. However, several minutes of calling CQ on 80m produced no QSOs.

Finding himself a frequency on 40m to run, Eric spotted himself on POTA Spots and began to call CQ. Eric's first QSO came at 1947 UTC with WA3GM in Pennsylvania. QSOs came steadily, with Eric's sixteenth QSO coming at 2011 UTC with AB9BZ in Alabama. This run included a P2P QSO with K2AG who was activating East Otto State Forest (K-5005) in New York; a P2P QSO with W8SUN who was activating Blue Ridge National Parkway (K-3378) in Virginia; and QSOs with operators in Pennsylvania (3), New York, Wisconsin (2), Maryland (2), Alabama, North Carolina, Minnesota, New Jersey, Virginia, Illinois (2), and South Carolina.

Eric finished his activation by checking POTA Spots for P2P QSO opportunities, and at 2013 UTC he completed a P2P QSO on 40m with K3MRK who was activating PA 156 State Game Land (K-8854) in Pennsylvania.

In all, Eric made seventeen QSOs, with three P2P QSOs, in just about half an hour. All of Eric's QSOs were CW and were made at the 5-watt level.

Miles did not operate but helped with station set-up and tear-down, did all the RATpedition photography, and took care of Theo-dog.