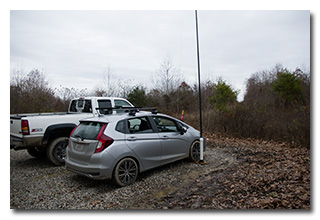 On Friday, December 31, 2021, one member of the Southeast Ohio Radio Adventure Team (SEORAT) performed a successful activation of Broken Aro Wildlife Area in Ohio as part of the Parks on the Air (POTA; link) program.

Eric, Vickie, and the dogs arrived at the Tick Ridge Road parking area at about 1720 UTC after negotiating a deeply rutted, narrow, muddy road. After parking the car in a way to minimize the need to walk in mud, and while Vickie walked the dogs, Eric quickly deployed his 28½' wire antenna on the 31' Jackite telescoping fiberglass mast and drive-on base. Eric set up the KX3 inside the car and was on the air at 1737 UTC.

Eric began operations on 80m and his only QSO there came at 1739 UTC with his good friend K8RAT in central Ohio.

Before changing to 40m, Eric paused to check POTA Spots for possible P2P QSOs but no QSOs were made.

Finding a frequency to run on 40m, Eric was pleased that his first QSO there, at 1746 UTC, was a second QSO with his friend K8RAT. This was immediately followed by a QSO with Eric's friend K4SWL in western North Carolina. QSOs came very quickly, with Eric's fifteenth QSO on 40m coming at 1800 UTC with K0BWR.

Switching bands, Eric's first QSO on 20m came at 1807 UTC with K7III in Washington. QSOs came much more quickly on 20m than Eric had experienced in several years, with his fourteenth QSO on that band coming only thirteen minutes later at 1820 UTC with WA6BJH in New Mexico. This run included QSOs with CU3AK and CU3DI in the Azores and NP3V in Puerto Rico. This run also included QSOs with two stations in Ontario, Canada, which one wouldn't normally expect to hear in Ohio in 20m, but also with stations in Oregon, Florida, Texas, and California which one would expect to hear in Ohio on 20m.

In all, Eric made thirty QSOs in about forty-three minutes. All of Eric's QSOs were CW and were made with five watts output.