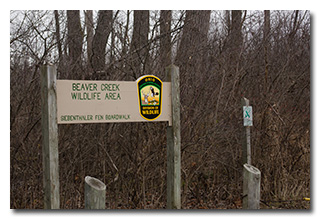 On Sunday, November 27, 2022, two members of the Southeast Ohio Radio Adventure Team performed a successful activation of Beaver Creek Wildlife Area (K-9446) in Ohio as part of the Parks on the Air (POTA; link) program.

Eric McFadden, WD8RIF, and Miles McFadden, KD8KNC, were traveling home from the National Museum of the United States Air Force when they stopped at Beaver Creek Wildlife Area. They were accompanied by Eric's daughter (and Miles's sister) Kate, KD8KNB, and her five-month-old son Archer, who is not yet licensed.

The quartet arrived at the Siebenthalen Fen Boardwalk access-point to Beaver Creek Wildlife Area at about 2100 UTC after a drive made memorable by rain and strong, gusty winds. Eric chose a place to set up the station and he and Miles quickly deployed the 28½' wire vertical on a 31' Jackite telescoping mast supported on a drive-on base. Eric set up his Elecraft KX3 in the Impreza's open glovebox and was on the air at 2117 UTC. He had hoped that while he was on the air Miles, Kate, and Archer would be able to explore the area along the Siebenthalen Fen Boardwalk but the very gusty winds and the real threat of rain prevented this. 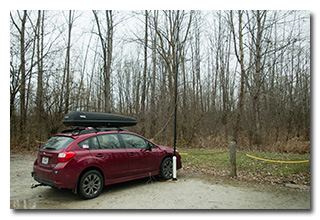 Eric found he had good cell-signal and he would be able to spot himself on the POTA Spots website and to use POTA Spots to identify possible Park-to-Park (P2P) QSOs.

Eric began his operation on 20m by finding a frequency clear of CQ World Wide DX Contest CW activity and calling "CQ", and he was pleased to be quickly auto-spotted on POTA Spots. Eric's first QSO came at 2120 UTC with KB2NT in New Jersey. This was followed at 2122 UTC by a QSO with K7ULM in Montana. At this point, QSOs seemed to stop. 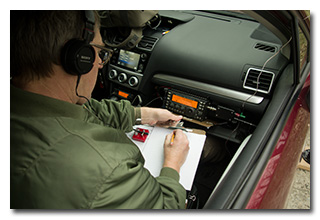 Trying again to run a frequency on 20m, Eric's first QSO in this run came at 2133 UTC with KJ4R in South Carolina. This time, QSOs came very quickly, with Eric's seventh QSO in this run coming at 2138 UTC with WA2FBN in New York. This run included a QSO with KP4M in Puerto Rico and QSOs with operators located in South Carolina, Georgia, Idaho, Minnesota, Florida, and New York.

Switching to 40m, Eric found himself a frequency clear of contest activity, began calling "CQ", and was again quickly auto-spotted on POTA Spots. Eric's first QSO in this run came at 2142 UTC with W8APS in Michigan. QSOs came very quickly, with Eric's tenth QSO in this run coming at 2150 UTC with WZ9B in Illinois. This run included QSOs with Eric's good friends K8RAT and K4SWL and QSOs with operators located in Michigan (2), North Carolina (2), Minnesota, Ohio (2), Pennsylvania, Florida, and Illinois.

In all, Eric made twenty-one QSOs with two P2P QSOs. All of Eric's QSOs were CW and were made at five watts output.