Stage's Pond State Nature Preserve, dedicated August 23, 1974, is nature's own monument to the great ice fields which once covered most of Ohio 17,000 years ago. Today, some 30 acres of this 64-acre depression lie under water with two adjacent marshy low areas in the central and southern parts of the depression. These areas, coupled with adjacent field and woodland areas, offer an opportunity to explore a number of habitats, each with its own unique array of species.

In the spring and fall, Stage's Pond is a refuge for a wide variety of waterfowl which stop during migration to rest and feed on the pond and marshy areas. Summer residents include a nesting community of great blue herons and many species of shorebirds. The oak-hickory uplands and open fields support populations of songbirds, quail, pheasant and several hawk species. Stage's Pond is equally diverse botanically. Aquatic, field, woodland and marsh species abound from April to late October, although the spring season offers the most variety in the form of colorful native wildflowers. 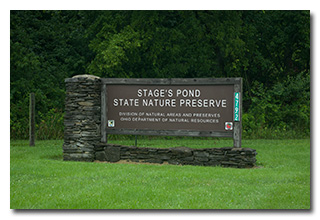 On Sunday, July 17, 2022, for the Parks on the Air program (POTA; link) Support Your Parks Summer 2022 Plaque Event, two members of the Southeast Ohio Radio Adventure Team performed a successful activation of Stage's Run State Nature Preserve in Ohio. This was the first of three planned activations the pair were to undertake on this day.

Eric, Miles, and Theo arrived at Stage's Pond State Nature Preserve at about 1630 UTC, about half an hour later than planned due stop-and-go traffic on US-33 between Logan and Lancaster, finding the nature preserve's two parking areas to be empty. With the car parked on the edge of one of the parking lots, Eric and Miles deployed the 28½' wire vertical on a 31' Jackite telescoping fiberglass mast supported on a drive-on base. Because of the rain, Eric set up his Elecraft KX3 inside the car and was on the air at 1642 UTC. 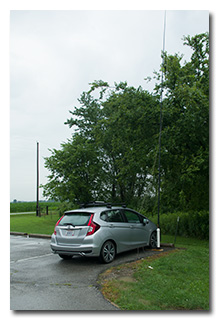 Eric began his operation by using POTA Spots to identify possible P2P QSOs and at 1642 UTC he made a P2P QSO on 40m with WW4N who was activating Manhattan Project (Oak Ridge) National Historical Park (K-4376) in Tennessee.

Expecting that 40m probably wouldn't be very productive, Eric decided to start on 40m anyway so that his friends K8RAT in central Ohio and K4SWL/VY2SW vacationing in Quebec might have a chance to work the park. Finding himself a frequency to run, Eric spotted himself on POTA Spots and began to call CQ. Against expectations, the 40m band turned out to be quite productive, with Eric's first QSO in this run coming at 1650 UTC with WB3DDJ in Pennsylvania. QSOs came quickly, with Eric's fifth QSO in this run coming at 1655 UTC with K3SLH in Pennsylvania. This run included QSOs with operators located in Pennsylvania (3), Florida, and Kentucky. UTC wit

Returning to run a frequency on 40m, Eric completed three more QSOs between 1701 UTC and 1704 UTC. In this run, Eric worked KI4MZC in Georgia, WT4U in Tennessee, and VE3GSS in Ontario.

Switching to 20m at 1706 UTC, Eric found a frequency to run, spotted himself, and began calling CQ. Eric's first QSO on 20m came at 1712 UTC with KB6QEW in Maine. Eric's second QSO and final QSO on 20m came at 1715 UTC with WA2JMG in New York. During this run, Eric happened to glance out his car window just in time to see a weasel scamper into the brush.

In all, Eric made twelve QSOs, with two P2P QSOs, in just over half an hour. All of Eric's QSOs were CW and were made at the 5-watt level.

Miles did not operate but helped with station set-up and tear-down, did all the RATpedition photography, and took care of Theo-dog.