Visitors to the 201-acre Springville Marsh State Nature Preserve have a unique opportunity to observe and study the beauty of nature and to reflect on the past. Three factors have had a marked effect on this resource. First, abundant groundwater, which has surfaced as many cool, calcium-rich springs, continues to nourish the special plant life found here. Also, many Ice Age plant species and others that are newcomers, provide this preserve with a remarkable and diverse inventory of flowering plants. Third, the uniqueness of the marsh has survived despite past agricultural and industrial disruption. 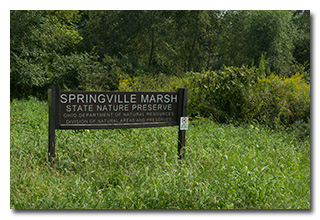 On Sunday, September 12, 2021, while enroute home from the Findlay Hamfest, two members of the Southeast Ohio Radio Adventure Team performed a successful activation of Springville Marsh State Nature Preserve in Ohio as part of the Parks on the Air (POTA; link) program.

Eric and Miles arrived at the empty parking area at 1745 UTC. Quickly deploying the 28½' wire antenna on the 31' Jackite telescoping fiberglass mast and drive-on base, and setting up the KX3 inside Miles' car in order to have some shade from the direct sun, Eric was on the air at 1756 UTC. 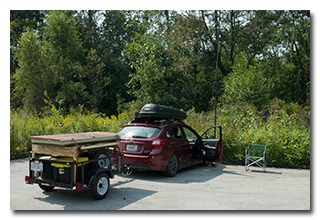 Eric began operations on 80m and his first QSO came at 1803 UTC with #1 Hunter VE3LDT in Ontario.

Pausing to check POTA Spots for P2P QSO opportunities, at 1808 UTC Eric made a P2P QSO on 40m with WA3GM who was activating Fort Washington State Park (K-1352) in Pennsylvania.

After finding his own frequency on 40m, QSOs came very quickly, and Eric made twenty QSOs between 1812 UTC and 1832 UTC. 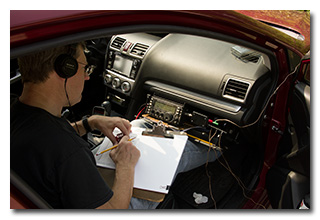 Switching to 30m, at 1839 UTC Eric made a QSO with NE4J in North Carolina. This was followed by a QSO at 1840 UTC with WD4RBX in South Caroline.

Eric called CQ on 20m for several minutes but no QSOs were made on that band.

In all, Eric made twenty-four QSOs in forty-four minutes. All of Eric's QSOs were CW and were made with five watts output.

Miles didn't operate but helped with navigation, helped with set-up and tear-down, and did most of the activation photography.