More than 300 million years ago this portion of Ohio lay under the waters of a vast inland ocean. Large sand deltas were deposited by streams flowing into the ancient seas. Over millions of years, compaction of these sand deltas fused the sand into rock, creating the Black Hand sandstone formation found in Ohio today. The oceans have long since disappeared and the subsequent weathering of this massive sandstone formation by water, wind and temperature extremes has created striking gorges, overhangs, rock shelters, promontories and waterfalls, best known in the Hocking Hills region. 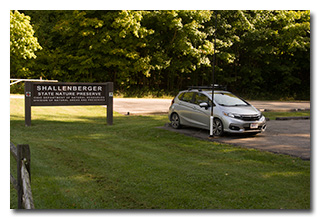 On Sunday, September 19, 2021, one member of the Southeast Ohio Radio Adventure Team performed a successful activation of Shallenberger State Nature Preserve in Ohio as part of the Parks on the Air (POTA; link) program.

Eric arrived at the parking area at 1400 UTC to find a young family just leaving their car for a hike. Eric parked well away from their SUV and deployed his 28½' wire antenna on the 31' Jackite telescoping fiberglass mast and drive-on base. Having forgotten to bring his camp-chair, Eric set up the KX3 inside the car and was on the air at 1411 UTC. 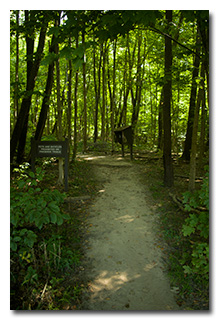 Pausing to check POTA Spots for P2P opportunities, at 1419 UTC Eric made a P2P QSO on 40m with KD3D who was activating Allegheny National Forest (K-0619) in Pennsylvania.

Finding his own frequency on 40m, Eric had a fast run of twenty-five QSOs in the twenty minutes between 1423 UTC and 1443 UTC despite an S6-level noise floor. Eric found that the KX3's Noise Reduction feature helped mitigate the high noise level.

Switching to 30m at 1445 UTC, Eric called CQ for several minutes but made no QSOs.

In all, Eric made thirty-one QSOs in about forty-five minutes. All of Eric's QSOs were CW and were made with five watts output.