Rockbridge's natural arch or bridge is more than 100 feet long and 10 to 20 feet wide, and gracefully arches 50 feet across a ravine. It is considered the largest natural bridge in Ohio. 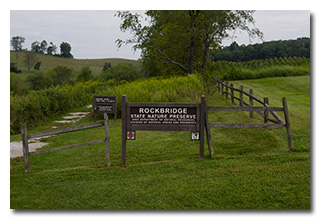 On Saturday, August 28, 2021, two members of the Southeast Ohio Radio Adventure Team performed a successful activation of Rockbridge State Nature Preserve in Ohio as part of the Parks on the Air (POTA; link) program.

Eric and Miles arrived at the Rockbridge State Nature Preserve's parking area at about 1240 UTC, about ten minutes later than Eric had planned to arrive, and found the parking area to be unoccupied. Eric and Miles quickly deployed the 28½' wire antenna on a 31' Jackite telescoping fiberglass mast and drive-on base and, because of the tight time schedule, set up the KX3 inside the car. Eric was on the air at 1250 UTC. 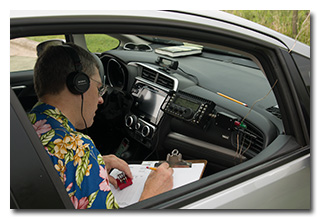 Eric was pleased to find he had excellent cell-signal at the location, and he was able to spot himself to POTA Spots (link) and use POTA Spots to identify possible park-to-park (P2P) QSO opportunities.

Eric began by finding a frequency on 80m, spotting himself, and calling "CQ POTA". At 1254 UTC, he was able to hear his friend K8RAT calling, but K8RAT couldn't hear him. Eric's first QSO came at 1255 UTC with number-one POTA Hunter VE3LDT in Ontario, Canada. This was followed at 1256 UTC with a QSO with W4RIN in Georgia.

At 1257 UTC, Eric found a frequency on 40m, spotted himself, and began calling "CQ POTA". Eric's first QSO on 40m came at 1300 UTC with his friend K8RAT, whom he had been unable to work earlier on 80m. QSOs came very quickly, with Eric's thirty-second QSO on 40m coming only twenty-four minutes later at 1324 UTC.

In all, Eric made thirty-six QSOs, with two P2P QSOs. All of Eric's QSOs were CW and were made with five watts output.

Miles did not operate but helped with navigation, he helped with set-up and tear-down, and he did all of the expedition photography.