Lake Katharine State Nature Preserve is a magnificent natural area in southeast Ohio's Jackson County. It was acquired by the Division of Natural Areas and Preserves through the foresight and generosity of two long-time business partners, Edwin A. Jones and James J. McKitterick. The focal point of this preserve is a clear water lake surrounded by towering sandstone cliffs. The lake was named after Edwin Jones' wife, Katharine.

The rich Appalachian forest is cut by three deep ravines in which are found magnolias, eastern hemlock, sweet gum, birch and beech. The dry ridge tops support an association of mountain laurel, Virginia pine and oak. The preserve has many native orchids as well as diverse spring flora. Lake Katharine harbors the state's largest and finest populations of both bigleaf and umbrella magnolia trees, both state-listed species. 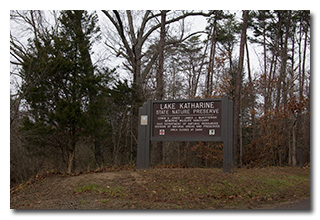 On Tuesday, December 28, 2021, one member of the Southeast Ohio Radio Adventure Team (SEORAT) performed a successful activation of Lake Katherine State Nature Preserve in Ohio as part of the Parks on the Air (POTA; link) program.

Eric and Theo arrived at the trailhead parking area at about 1730 UTC and Eric quickly deployed his 28½' wire antenna on the 31' Jackite telescoping fiberglass mast and drive-on base. Eric set up the KX3 inside the car and was on the air at 1736 UTC. 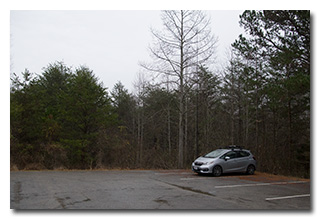 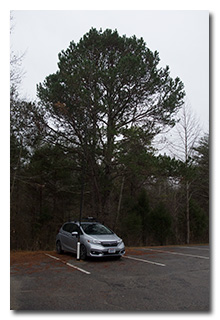 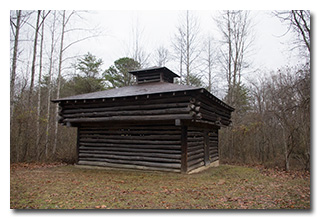 Eric began operations on 80m and his first QSO came at 1738 UTC with his friend K8RAT in central Ohio. This was followed at 1740 UTC by a QSO with Eric's friend K4SWL in western North Carolina.

Finding a frequency to run on 40m, Eric was rewarded with an immediate QSO at 1753 UTC with his frient K8RAT in central Ohio. QSOs on 40m came quickly, with Eric's twenty-fourth QSO in this run coming at 1816 UTC with KB9BVN in Indiana.

Pausing again to check POTA Spots for possible P2P QSOs, Eric made a P2P QSO at 1819 UTC on 20m with NN0G who was activating Arapaho National Forest (K-4400) in Colorado.

In all, Eric made thirty-one QSOs in about forty-five minutes. All of Eric's QSOs were CW and were made with five watts output.