Twenty acres of naturally developing tributary swamp on Durbin Run in Hocking County are now under the protection of ODNR, thanks to a gift from Dr. Francis and Mrs. Joyce Kessler. A variety of wetland-dwelling plants thrive in the swamp, including buttonbush and bur-marigold.

A healthy population of beaver also calls the swamp home. During the spring and fall migration period, the preserve offers excellent waterfowl viewing. 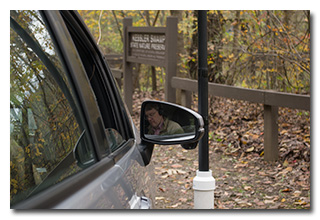 On Saturday, October 30, 2021, two members of the Southeast Ohio Radio Adventure Team performed a successful activation of Kessler Swamp State Nature Preserve in Ohio as part of the Parks on the Air (POTA; link) program.

Eric, Miles, and Theo arrived at the Kessler Swamp viewing area at 1900 UTC to find only a single car, unoccupied, to be in the small parking area. Eric and Miles deployed Eric's 28½' wire antenna on the 31' Jackite telescoping fiberglass mast and drive-on base. Eric set up the KX3 inside the car and was on the air at 1913 UTC. 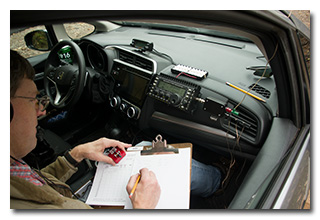 Eric was disappointed to find he had only poor cell-signal but was pleased he had enough signal to allow him to text his friends K8RAT and K4SWL for spotting assistance.

Switching to 40m, Eric's first QSO there came at 1923 UTC with W9AV in Wisconsin. This short QSO was made difficult by the arrival of a strong digital signal on the frequency. Eric's second QSO on 40m came at 1924 UTC with K4SWL in North Carolina. To escape the digital QRM, Eric moved up the band a bit and, perhaps because band conditions were good, made an additional twenty-four QSOs in rapid succession.

In all, Eric made twenty-nine QSOs in about thirty-six minutes. All of Eric's QSOs were CW and were made with five watts output. 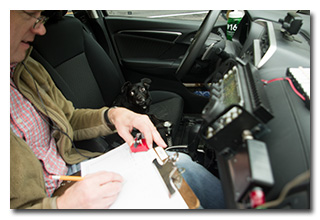