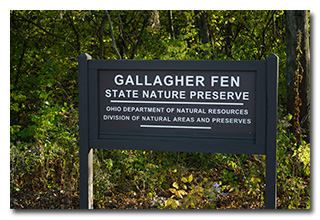 On the afternoon of Sunday, October 23, 2022, two members of the Southeast Ohio Radio Adventure Team performed a successful activation of Gallagher Fen State Nature Preserve (K-9408) in Ohio as part of the Parks on the Air (POTA; link) program. Eric McFadden, WD8RIF, and Miles McFadden, KD8KNC, performed the activation surrounded by glorious Fall color, and were joined the two small dogs Ginny and Theo.

This was the third of three planned activations in Indiana and Ohio over a two day period during which Eric, his wife Vickie, and his son Miles were in Indianapolis to experience a flight in a Ford Tri-Motor out of Indianapolis Metropolitan Airport (KUMP). The first activation, on the afternoon of the 22nd, had been an activation of Chinook Fish and Wildlife Area, K-4190 (link). The second activation, on the afternoon of the 23rd, has been an activation of Mounds State Park, K-2261 (link).

Following the activation of Mounds State Park, the trio plus dogs continued driving east toward home, and arrived at Heart of Ohio Antique Center (link) at around 2000 UTC, where Vickie stayed to explore while Eric, Miles, and the two small dogs, drove the less than four mile distance to Gallagher Fen State Nature Preserve for the activation. Upon arriving at the very small parking area, and taking into consideration the unseasonably warm temperature, Eric decided to hang his antenna on his 31' Jackite telescoping fiberglass mast supported on a drive-on base and operate in his folding camp-chair. Initially, Eric wanted to deploy and test his homebrew 40m end-fed halfwave antenna but quickly determined the parking area and associated clear space was just too small to accommodate a 67' wire and 25' of coaxial feedline, so he and Miles instead deployed the proven 28½' wire vertical on the Jackite mast. Setting up his new-to-him Yaesu FT-817ND on his folding camp-chair, and connecting to it his LDG Z11 ATU, LDG 4:1 unun, venerable CMOS Super Keyer II, and American Morse Equipment "Mini-B" single-lever CW paddle, Eric was on the air at 2033 UTC. This was to be Eric's second activation with the FT-817ND.

Fortunately—because he had forgotten to previously announce this activation on POTA Spots—Eric found he had good cell-signal at this location, and he was able to use POTA Spots (link) to spot himself and to identify possible Park-to-Park (P2P) QSO opportunities.

Eric began operations on 20m by finding himself a clear frequency, beginning to call CQ, and spotting himself to POTA Spots. Eric's first QSO came at 2034 UTC with KE4Q in Florida. QSOs came quickly, with Eric's eleventh QSO coming at 2049 UTC with N4NN in Georgia. This run included a QSO with CU3AA in Portugal and QSOs with stations located in Florida, New York (2), Minnesota, Rhode Island, Idaho, Colorado, Arkansas, and Georgia. 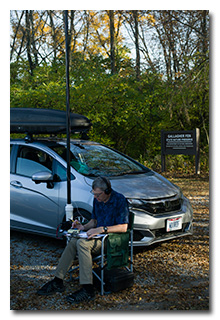 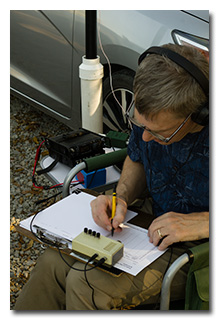 Switching to 40m, Eric found a clear frequency to run, began calling CQ, and was pleased to be quickly auto-spotted on POTA Spots. Eric's first QSO in this run came at 2053 UTC with his good friend K8RAT in Ohio. QSOs came quickly, with Eric's fifteenth QSO on 40m coming at 2107 UTC with W8VX in Ohio. This run included QSOs with stations located in Ohio (5), North Carolina (3), Illinois (3), New York, Kentucky, and Pennsylvania.

In all, Eric logged twenty-eight QSOs. All of Eric's QSOs were CW and were made with 5w output.

Miles did not operate but helped with set-up and tear-down, took care of the dogs, and did all the activation photography. 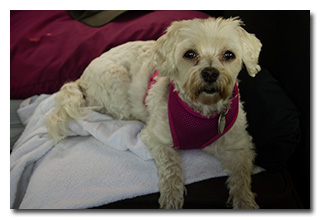