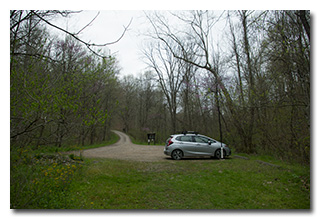 On Friday, April 29, 2022, one member of the Southeast Ohio Radio Adventure Team performed a successful activation of Desonier State Nature Preserve in Ohio as part of the Parks on the Air (POTA; link) program.

Upon arrival at the unoccupied parking lot, Eric parked, walked Theo, and quickly deployed his 28½' wire vertical on a Jackite 31' telescoping fiberglass mast and drive-on mount. Because of the cool temperature, Eric mounted his KX3 inside the car and was on the air at 1336 UTC. 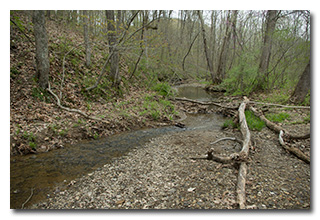 Eric had been concerned about poor conditions on the HF bands but, upon checking 40m, was pleased to hear a low noise floor. Eric found a frequency to run on 40m, began calling CQ, and spotted himself to POTA Spots. Eric's first QSO came at 1339 UTC, after three minutes of calling CQ, and was a P2P QSO with NK8O, a Kansas-based operator who was performing a POTA activation of Lake Guntersville State Park (K-1044) in Alabama. QSOs came steadily, with Eric's eighth QSO coming at 1348 UTC with N9VFR in Illinois. This run included the aforementioned P2P QSO and QSOs with operators located in Alabama (2), North Carolina, Wisconsin, Pennsylvania (2), Massachusetts, and Illinois.

In all, Eric made fourteen QSOs, including two P2P QSOs, in about half an hour. All of Eric's QSOs were CW and were made with five watts output.

Under normal propagation conditions, Eric would have expected QSOs to have come more quickly. Still, those stations Eric worked were, almost with exception, strong and the signal reports he received similarly didn't indicate poor propagation. This gave Eric hope that his upcoming activation of Muskingum River State Park would be similarly successful.