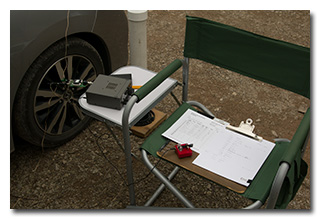 On Friday, March 18, 2022, one member of the Southeast Ohio Radio Adventure Team performed a successful activation of Desonier State Nature Preserve in Ohio as part of the Parks on the Air (POTA; link) program.

Following a successful activation of Muskingum River State Park at Lowell Lock #3 (link), Eric McFadden, WD8RIF, visited Desonier State Nature Preserve on a beautifully warm but overcast day, arriving at about 1915 UTC. Eric was accompanied by his wife Vickie, KC8MAJ, and the small dogs, Mindy and Theo. This was the fourth POTA CW activation of Desonier State Nature Preserve, the first, second, and third being Eric's activations on August 19, 2019 (link), February 27, 2022 (link), and March 11, 2022 (link). 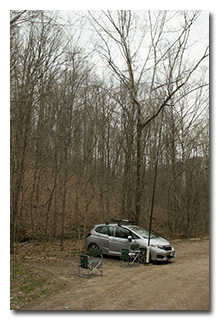 Upon arrival, Eric found the parking area to unoccupied. Parking in a location that would allow him to operate outside the car in his folding camp-chair, Eric quickly deployed his 28½' wire vertical on a Jackite 31' telescoping fiberglass mast and drive-on mount—discovering upon tear-down that he had forgotten to drive onto the drive-on base. For a change, Eric decided to exercise his four-band Elecraft K1 and set up his station on his folding camp-chair placed adjacent to the mast, powering the K1 with a Talentcell 12v 3000mAh lithium ion battery pack. Eric was on the air at 1930 UTC.

Eric began operations on 40m by finding himself a frequency to run, calling "CQ POTA", and spotting himself to POTA Spots. Eric's first QSO came at 1931 UTC—even before he could finish spotting himself—with a QSO with his good friend K8RAT in north-central Ohio. QSOs came steadily if not briskly, with Eric's eleventh QSO coming at 1948 UTC with VA3CP in Ontario. This run included QSOs with stations located in Ohio, New Jersey, Virginia (2), New York (3), Wisconsin, Indiana, Pennsylvania, and Ontario.

Switching to 30m, Eric found himself a frequency to run, began calling "CQ POTA", and spotted himself on POTA Spots. Eric managed only two QSOs on 30m before deciding to call it quits, the first coming at 1952 UTC with K9IS in Wisconsin, and the second coming at 1953 UTC with N0TOP in Missouri. Eric was pleased to have been able to log K9IS on both 40 and 30m.

Eric was pleased with the performance of his four-band Elecraft K1 and is looking forward to using it for other activations.