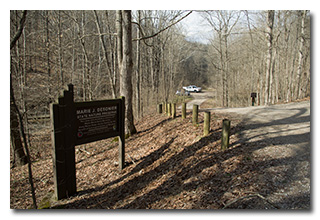 On Friday, March 11, 2022, one member of the Southeast Ohio Radio Adventure Team performed a successful activation of Desonier State Nature Preserve in Ohio as part of the Parks on the Air (POTA; link) program.

Upon arrival, Eric unexpectedly found that fellow SEORAT member Jeff Slattery, N8SUZ, was just starting his own activation of Desonier State Nature Preserve. Eric parked as far away from Jeff's station as he could in the small parking area in hopes of minimizing interaction between the two stations. Eric quickly deployed his tried-and-true 28½' wire vertical on a Jackite 31' telescoping fiberglass mast and drive-on mount. Eric set up his KX3 inside the car and was on the air at 1923 UTC.

Because Jeff was operating on 40m, Eric chose to start his operation on the not-harmonically-related 30m band. Finding himself a frequency to run on 30m, Eric spotted himself on POTA Spots and began calling "CQ POTA", pleased that he wasn't hearing Jeff's 100w 40m SSB signal at all in his KX3's receiver. Eric's first QSO came at 1926 UTC with AB4KN in Georgia. QSOs came briskly, with Eric's eighteenth QSO coming at 1944 UTC with AI5P in Colorado. This run included QSOs with operators located in Georgia (2), Tennessee (2), Minnesota, Illinois (2), Connecticut, Wisconsin, Missouri, Alabama, New York, North Carolina, Maine, New Hampshire, Michigan (2), and Colorado. 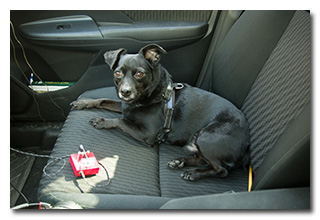 Switching to 20m, Eric found himself a frequency to run, spotted himself on POTA Spots, and began calling "CQ POTA". Eric's first QSO on 20m came at 1949 UTC with W5ODS in Oklahoma. QSOs came steadily, with Eric's seventh QSO in this run coming at 1955 UTC with VA2YZX in Quebec. This run included QSOs with operators located in Oklahoma (2), Colorado (2), Florida, Michigan, and Quebec. During this run, Jeff completed his own activation, tore down his station, and headed back to his home QTH in Athens. As on 30m, during this run, Eric heard no sign of Jeff operating his 100w station only about 50' away.

In all, Eric made twenty-seven QSOs, including two P2P QSOs. All of Eric's QSOs were CW and were made with five watts output.