Boord contains one of the best examples of a hemlock ravine in Washington County and the surrounding area. The preserve's state-listed species include rock skullcap, narrow-leaved toothwort and golden-knees. Falls Run cuts through a massive layer of Permian-age sandstone to form the heart of this preserve which is an eastern hemlock-shrouded stream gorge 60-80 feet deep.

Numerous scenic cliffs and overhangs occur along this ravine. The preserve honors the Boord family of Dayton, Ohio, who made a partial gift of this preserve to the division in 1986. The dry hilltops are dominated by oak-hickory mature woods along with Virginia pine and mountain laurel. Yellow birch, cherry birch and eastern hemlock grow on northerly exposures. It is an excellent site for viewing woodland spring wildflowers. 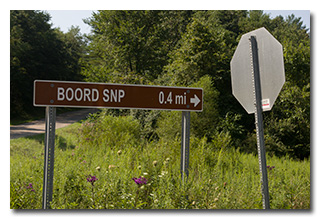 Eric McFadden, WD8RIF, hadn't planned to perform any activations on this day but found himself to be at loose ends on this Saturday morning and decided to perform an impromptu activation of Boord State Nature Preserve, which had been added to the POTA program only a few days prior. Eric was accompanied by his son Miles, KD8KNC, and the little dog Theo. 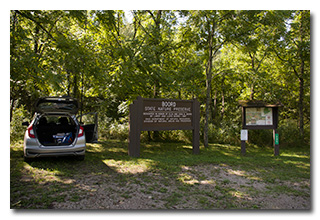 Eric, Miles, and Theo arrived at the Boord State Nature Preserve's western parking area at a few minutes past 1500 UTC to find the area to be unoccupied. Eric was initially concerned about the location of power lines but Miles identified a place to park the car and deploy the antenna such that it would have been impossible for the antenna to fall onto the power line. Eric and Miles quickly deployed the 28½' wire antenna on a 31' Jackite telescoping fiberglass mast and drive-on base and set up the KX3 inside the car. Eric was on the air at 1516 UTC.

Eric was not all surprised to find he had absolutely no cell-signal at this location, so he wasn't able to access POTA Spots (link) to spot himself or to identify possible park-to-park (P2P) QSO opportunities. Having anticipated this situation, Eric had previously announced his activation on POTA Spots so that when the Reverse Beacon Network (RBN, link) picked up his CW signal, he would be spotted on POTA Spots by algorithm. As a back-up, he had asked his friends K8RAT and K4SWL to watch the RBN and spot him to POTA Spots if the algorithm failed. 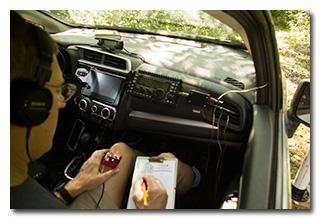 In a rare stroke of luck, as soon as Eric turned on his KX3, he heard a station calling "CQ POTA". Eric answered the call and at 1516 UTC Eric made a P2P QSO on 40m with WA3GM who was activating Neshaminy State Park (K-1390) in Pennsylvania.

Eric had told K8RAT and K4SWL that he would start operations on 80m, so after the P2P QSO with WA3GM, he found a frequency on 80m and began calling "CQ POTA". His first QSO on 80m came at 1521 UTC with NE4TN in Tennessee. This QSO was immediately followed by a QSO with K8RAT in central Ohio. Eric's third QSO on 80m came at 1522 UTC with inveterate POTA Hunter VE3LDT in Ontario.

In all, Eric made twenty-six QSOs, with one P2P QSO. All of Eric's QSOs were CW and were made with five watts output.

Miles did not operate but helped with navigation, set-up and tear-down, and he did nearly all of the expedition photography.