The prime feature of this preserve is a narrow, east-west gorge cut by the Licking River through the famous Black Hand sandstone formation. The name "Blackhand" originated from a dark, hand-shaped Indian petroglyph that was engraved on the face of a massive sandstone cliff along the north side of the river. The engraving was destroyed in 1828 during construction of the Ohio-Erie Canal, which went through the gorge. Sections of the canal towpath and canal locks may be seen from the trails along the river. 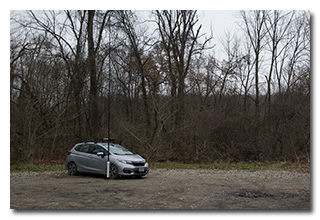 On Saturday, November 27, 2021, one member of the Southeast Ohio Radio Adventure Team (SEORAT) performed a successful activation of Black Hand Gorge State Nature Preserve in Ohio as part of the Parks on the Air (POTA; link) program.

Eric, Vickie, Mindy, and Theo arrived at the Brownsville Road parking area at 1925 UTC to find only one other vehicle in the parking area. While Vickie walked with Theo and Mindy dogs, Eric quickly deployed his 28½' wire antenna on the 31' Jackite telescoping fiberglass mast and drive-on base. Eric set up the KX3 inside the car and was on the air at 1936 UTC. 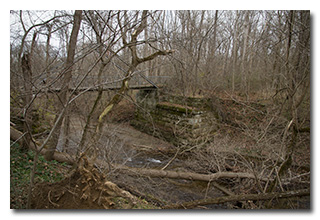 Because this was the weekend of CQ Worldwide CW Contest, Eric had decided to concentrate his efforts on the contest-free WARC bands—in particular, on 60 and 30m.

Because it wasn't yet dark and contest activity wouldn't be strong on 80m, Eric began operations on 80m in order to give his friend K8RAT in central Ohio an opportunity but no QSOs were made on that band.

When QSOs on 30m stopped coming, Eric used POTA Spots to identify P2P QSO opportunities and attempted to work KP4RK in Puerto Rico on 15m and AB9CA in Arizon on 20m but no QSOs were made.

Eric decided to give 40m a try despite the heavy CQWW contest activity on the band. Finding a frequency in the old Novice sub-band at 2002 UTC, Eric's first QSO on 40m came at 2004 UTC with WF4I in North Carolina. QSOs came quickly on 40m with Eric's fifth QSO on the band coming at 2009 UTC with KX4UI in Florida. This run included a third QSO with W2NR in New Hampshire.

In all, Eric made eleven QSOs in about thirty-three minutes. All of Eric's QSOs were CW and were made with five watts output.