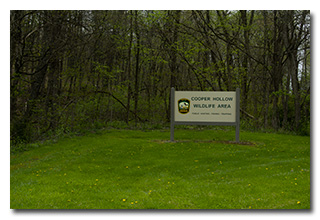 Eric and the dogs arrived at the parking area near the intersection of Moriah Road and US Route 35 but found it already occupied by a vehicle. Eric chose to explore a half-mile or so further down Moriah Road to a second parking area. However, Eric liked the look of the first parking area more and returned to it for his activation. The other vehicle was still there but Eric was able to park along the edge of the gravel parking area, where his antenna and counterpoise wires wouldn't be a problem and quickly deployed his 28½' wire antenna on his 31' Jackite telescoping fiberglass mast and drive-on base and, because of the slight chill and the breeze, decided to set up his KX3 inside the car. Eric was on the air at 1743 UTC. 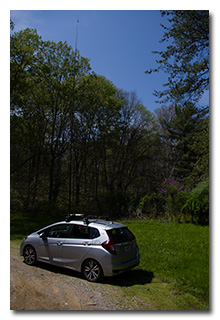 Eric was surprised and pleased to find he had excellent cell-signal at this location and he was able to use the POTA Spots website (link) to spot himself and to look for possible park-to-park (P2P) QSOs.

Eric began operations on 80m and within seven minutes he had three QSOs in the log. This short run included a P2P QSO with KB3WAV who was activating Fort Frederick State Park (K-1570) in Maryland.

Eric next looked at POTA Spots and made a P2P QSO on 40m with KU8T who was activating Port Austin State Harbor (K-6819) in Michigan.

Finding his own frequency on 40m, Eric made fifteen QSOs in just under twenty minutes. This run included a P2P QSO with NJ0Q who was activating Lake Louise State Park (K-2503) in Minnesota.

After the run on 40m, Eric again consulted POTA Spots and was able to make a P2P QSO on 40m with WA3TMR who was activating Clemmons Educational State Forest (K-4853) in North Carolina.

In all, Eric made twenty QSOs, including four P2P QSOs, in about thirty-four minutes. All of Eric's QSOs were CW and were made at the 5-watt level.