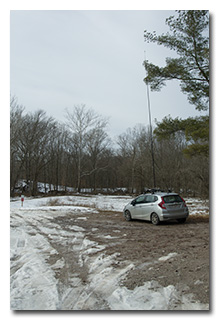 On Friday, February 11, 2022, one member of the Southeast Ohio Radio Adventure Team performed a successful activation of Waterloo Wildlife Area in Ohio as part of the Parks on the Air (POTA; link) program.

Eric arrived at Waterloo Forest at about 1440 UTC, unsure of what he was going to find. Had melting snow on the Forestry Roads re-melted overnight to form impassable ice-covered roads? Had the melting snow turned the Forestry Roads into impassible mud? Fortunately, Eric found neither scenario to be the case. The Forestry Road into the park was mostly clear of snow and ice and the mud wasn't too deep for his front-wheel-drive car to handle. FR2, the road that leads to his preferred operating location within Waterloo Wildlife Area, was still gated and inaccessible, so Eric found a spot at the intersection of FR1 and FR2, deployed his 28½' wire antenna on his 31' Jackite telescoping fiberglass mast and drive-on base, and set up his KX3 inside the car. Eric was on the air at 1451 UTC.

Expecting to have no cell-signal for this activation, Eric had previously announced his activation on POTA Spots (link) with hopes that POTA Spots would see his Reverse Beacon Network (RBN, link) spot and would automatically spot him at Waterloo Wildlife Area on POTA Spots.

Upon powering up his KX3, Eric was distressed to find an S-7 noise floor on 40m. This is the first time in his twenty activations of Waterloo Wildlife Area that Eric found such a high noise level on any of the HF bands. With his KX3's Noise Blanker turned set at "12", the noise was just bearable, and Eric found himself a frequency to run on 40m. He called "CQ POTA" just once before being answered by AK4JA in Georgia. Eric had to call CQ for several minutes before he made his second QSO, this one coming at 1501 UTC with WA4RCW in Tennessee. Thereafter, QSOs came steadily, with Eric's fourteenth QSO on 40m coming at 1516 UTC with WZ9B in Illinois. This run included a park-to-park (P2P) QSO with WG4Z who was activating South Mountains State Park (K-2753) in North Carolina and a P2P QSO with ND9M who was activating Florida Caverns State Park (K-1867) in Florida. This run also included QSOs with operators in Georgia, Tennessee (2), Virginia, New Jersey, Arkansas, North Carolina, Indiana, Ohio (2), Michigan, and South Carolina.

In all, Eric made eighteen QSOs, with two P2P QSOs, in about thirty-five minutes. All of Eric's QSOs were CW and were made at the 5-watt level.