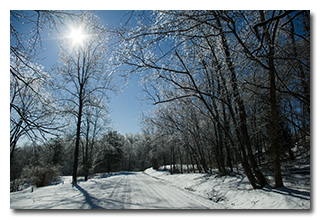 On Sunday, February 6, 2022, one member of the Southeast Ohio Radio Adventure Team performed a successful activation of Waterloo Wildlife Area in Ohio as part of the Parks on the Air (POTA; link) program.

Eric McFadden, WD8RIF, visited Waterloo Wildlife Area on beautiful, sunny morning with ice from Winter Storm Landon glistening in the trees like diamonds, for his 19th activation of the park.

Eric arrived at Waterloo Forest at about 1545 UTC. Because Forestry Road 2, the road that leads to his preferred operating location within Waterloo Wildlife Area, was still gated and inaccessible, and since cell-signal near the wildlife area entrance as virtually none-existent, Eric chose to follow snow-covered Forestry Road 1 to Penrod Lake, which also has no cell-signal but is prettier, for his activation. Eric found a spot on the unplowed cul-de-sac overlooking Penrod Lake and deployed his 28½' wire antenna on his 31' Jackite telescoping fiberglass mast and drive-on base and set up his KX3 inside the car. Eric was on the air at 1559 UTC. 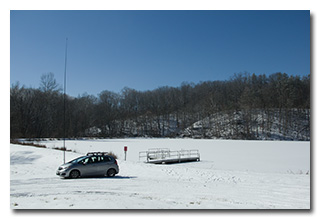 While trying to find himself a frequency to run on 40m, Eric found VA2EO performing a SOTA activation of Shefford Mountain (VE2/ES-008) in Quebec and a QSO was logged with him at 1600 UTC.

Wanting to get off the roads before the rising temperatures turned the snow on the roads to slickery slush, Eric chose not to continue this activation on 30m or 20m.

In all, Eric made twenty-six QSOs, with one P2P QSO, in thirty-one minutes, all on 40m. All of Eric's QSOs were CW and were made at the 5-watt level.