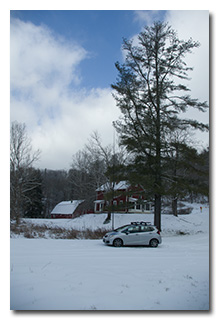 On Saturday, February 5, 2022, one member of the Southeast Ohio Radio Adventure Team performed a successful activation of Waterloo Wildlife Area in Ohio as part of the Parks on the Air (POTA; link) program.

During a Level 2 Snow Emergency in the aftermath of Winter Storm Landon, Eric McFadden, WD8RIF, visited Waterloo Wildlife Area to participate in the Arizona ScQRPions "Flight of the Bumblebees" (FYBO, info) field event, an event in which the temperature measured at the operator's key is inversely proportional to his contest score-multiplier.

Following a successful FYBO+POTA operation at Fox Lake Wildlife Area (link), Eric arrived at Waterloo Forest at about 1630 UTC, finding Forestry Road 2, the road that leads to his preferred operating location within Waterloo Wildlife Area, to be still gated and inaccessible. Having anticipated his inability to climb to where he knew he could find cell-signal, Eric had announced this activation on POTA Spots (link) and had asked his friends K4SWL and K8RAT to watch the Reverse Beacon Network (RBN) for him and spot him on POTA Spots. Eric found a spot on the unplowed parking area at the intersection of unplowed FR1 and unplowed-and-inaccessible FR2 and quickly deployed his 28½' wire antenna on his 31' Jackite telescoping fiberglass mast and drive-on base. Because his previous operation at Fox Lake Wildlife Area had produced the lowest temperature Eric was likely to see on this day, he chose to set up his KX3 inside the car in order to remain comfortable. Eric was on the air at 1640 UTC. 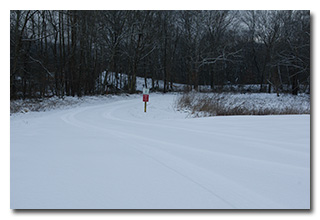 Eric began operations by finding himself a frequency to run on 40m and began calling "CQ FYBO". Eric's first QSO came at 1642 UTC with W4NLT, an FYBO participant in Virginia. Eric's second QSO came at 1648 UTC with his friend K4SWL in North Carolina; Tom was unable to copy when Eric asked if he had been spotted on POTA Spots but when other stations began calling on top of Tom, Eric was confident he had, indeed, been spotted. Thereafter, QSOs came quickly, with Eric's twenty-fifth QSO coming at 1711 UTC with W4PJW in Virginia. This run included a mix of QSOs with FYBO participants and POTA Hunters; a P2P QSO with K0BWR who was activating Perry State Wildlife Area (K-7941) in Kansas; and QSOs with operators in Virginia (3), North Carolina (3), New York, Pennsylvania (3), New Hampshire, West Virginia, New Jersey, Michigan, Louisiana, Tennessee, Wisconsin (2), Kansas, Ohio (2), Indiana, and Illinois. During the run, Eric watched his temperature-at-the-key climb from 62°F to 75°F due to solar-gain through his car's windows. 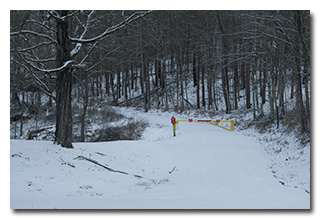 In all, Eric made twenty-five QSOs, with one P2P QSO, in thirty-one minutes, all on 40m. Because FYBO rules allow competitors to work any station for credit, twenty-one of these QSOs counted towards his FYBO score when the POTA Hunters he had also worked at Fox Lake Wildlife Area were identified. All of Eric's QSOs were CW and were made at the 5-watt level.

When the operations at Fox Lake Wildlife Area and Waterloo Wildlife Area were combined, Eric had made thirty-seven QSOs that qualified for FYBO, had worked seventeen SPCs for multipliers, had earned the x5 multiplier for a temperature measured-at-the-key between 20° and 29°F, and had a calculated score of 12,580 points in Category "Single Operator, Field".