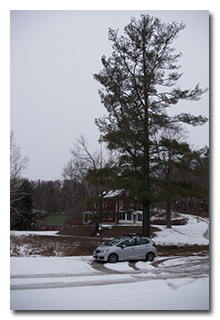 On Sunday, January 23, 2022, one member of the Southeast Ohio Radio Adventure Team performed a successful activation of Waterloo Wildlife Area in Ohio as part of the Parks on the Air (POTA; link) program.

Eric McFadden, WD8RIF, returned to Waterloo Wildlife Area on a cold and dreary January morning for his 17th activation of the park. Eric arrived at Waterloo Forest at about 1915 UTC and found that Forestry Road 2 was still behind a locked gate and inaccessible. Having anticipated the inability to climb to where he knew he could find cell-signal, Eric had announced this activation on POTA Spots (link) and had asked his friends K4SWL and K8RAT to watch the Reverse Beacon Network (RBN) for him and spot him on POTA Spots. Eric found a spot on the unplowed and icy parking area at the intersection of FR1 and FR2 and, while little dog Theo explored, he quickly deployed his 28½' wire antenna on his 31' Jackite telescoping fiberglass mast and drive-on base and set up his KX3 inside the car. Eric was on the air at 1533 UTC.

Finding himself a frequency to run on 40m and began calling CQ. It turned out the POTA Spots did see Eric on RBN and created a spot, and Eric's first QSO came at 1536 UTC with W4JL in North Carolina. QSOs came so quickly that Eric couldn't even begin to maintain a logsheet—the best he could do was make sure his CW copy-paper was legible and included the time of the QSO for later transcription to the log-sheet. Eric's thirty-first QSO came at 1559 UTC, only twenty-six minutes after his first QSO, with KG0TW in Missouri. This exciting run included QSOs with operators in North Carolina (6), Texas (2), Virginia (3), Oklahoma, Illinois (3), Alabama, South Carolina, Pennsylvania (4), Ohio, Tennessee, Michigan, Ontaria (2), and New York (2).

In all, Eric made thirty-one QSOs in thirty-nine minutes, all on 40m. All of Eric's QSOs were CW and were made at the 5-watt level.