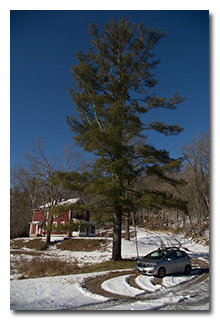 On Friday, January 21, 2022, one member of the Southeast Ohio Radio Adventure Team performed a successful activation of Waterloo Wildlife Area in Ohio as part of the Parks on the Air (POTA; link) program.

Using use-or-lose vacation, Eric McFadden, WD8RIF, returned to Waterloo Wildlife Area on a cold (22°F) but beautifully sunny January afternoon. During the drive to Waterloo Forest, Eric had been concerned that Forestry Road 2, which leads to his preferred operating location that has good cell-signal, wouldn't have been plowed of the 10" of snow that had fallen earlier in the week but he was prepared to attempt to make the climb in his snow-tire equipped Honda Fit. Eric arrived at Waterloo Forest at about 1920 UTC and found that not only had Forestry Road 2 not been plowed, the gate at the bottom of the road was gated and locked. Having anticipated the inability to climb to where he knew he could find cell-signal, Eric had previously asked his friends K4SWL and K8RAT to watch the Reverse Beacon Network (RBN) for him and spot him on POTA Spots. Eric found a spot on the unplowed and icy parking area at the intersection of FR1 and FR2 and quickly deployed his 28½' wire antenna on his 31' Jackite telescoping fiberglass mast and drive-on base and set up his KX3 inside the car. Eric was on the air at 1931 UTC.

After setting up his station, Eric was surprised and pleased to discover he had just enough cell-signal to send and receive texts.

Finding himself a frequency to run on 40m, Eric texted the frequency to K4SWL and K8RAT, asking them to spot him on POTA Spots (link) and began calling CQ. His first QSO came at 1934 UTC with K8ITU in West Virginia. This was followed at 1935 UTC with a QSO with K4SWL in western North Carolina and at 1936 UTC with a QSO with W3GER in Pennsylvania. QSOs after this point came slowly, but not so slowly that Eric was ever concerned he wouldn't make the ten QSOs required for a valid activation. Eric's fourth QSO came at 1939 UTC with K8RAT in central Ohio, and his fifth came at 1940 UTC with AC3IE in Pennsylvania. It was about this time that the pileups started and the QSO-rate went way up. Eric's twenty-fifth QSO came at 1957 UTC with W2NR in New Hampshite. The entire twenty-seven minute run included QSOs with operators in West Virginia, North Carolina, Pennsylvania, Ohio, Georgia, Wisconsin, Tennessee, New York, Virginia, Illinois, Florida, and New Hampshire.

In all, Eric made twenty-five QSOs in thirty-four minutes, all on 40m. All of Eric's QSOs were CW and were made at the 5-watt level.

After Eric finished his activation, he found a text from K8RAT that said Eric had been for some reason miss-spotted for a short period as being at not-yet-activated park K-9633 in Colorado. This might help to explain why the number of callers increased so quickly about ten minutes into the activation. Eric hopes no hunters are disappointed to have not worked K-9633.