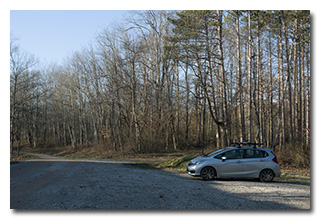 On Saturday, January 15, 2022, one member of the Southeast Ohio Radio Adventure Team performed a successful activation of Waterloo Wildlife Area in Ohio as part of the Parks on the Air (POTA; link) program.

On a cold but sunny January afternoon, Eric McFadden, WD8RIF, returned to Waterloo Wildlife Area, arriving at about 1950 UTC. Eric was accompanied by his small dog Theo. After a short walk with Theo, Eric deployed his 28½' wire antenna on his 31' Jackite telescoping fiberglass mast and drive-on base and set up his KX3 inside the car. Eric was on the air at 2000 UTC.

Eric began operations by looking for P2P QSO opportunities and almost immediately at 2001 UTC, he made a P2P QSO on 30m with KD4O who was activating Peachtree Rock Wildlife Management Area (K-9223) in South Carolina.

In all, Eric made twenty-two QSOs in thirty minutes. All of Eric's QSOs were CW and were made at the 5-watt level.