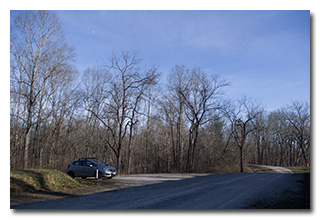 On Tuesday, January 11, 2022, one member of the Southeast Ohio Radio Adventure Team performed a successful impromptu activation of Waterloo Wildlife Area in Ohio as part of the Parks on the Air (POTA; link) program.

On a cold but sunny January afternoon, Eric McFadden, WD8RIF, returned to Waterloo Wildlife Area, arriving at about 1915 UTC. Eric was accompanied by the small dogs Theo and Mindy. After a short walk with the dogs, Eric deployed his 28½' wire antenna on his 31' Jackite telescoping fiberglass mast and drive-on base and set up his KX3 inside the car. Eric was on the air at 1915 UTC.

Finding himself a frequency to run on 40m, Eric spotted himself and began calling CQ. His first QSO on 40m came at 1936 UTC with N3RT in Delaware. QSOs came so fast on 40m that Eric was unable to keep up with the logging—he was forced to just make sure his CW-copy paper was legible and complete. Eric's thirty-first QSO on 40m came at 2002 UTC with WA4RCW in Tennessee. This run included QSOs with Eric's friends K4SWL in western North Carolina and K8RAT in central Ohio, and included QSOs with operators in Delaware, Pennsylvania, North Carolina, New York, Ohio, Kentucky, Wisconsin, Indiana, Florida, Virginia, Alabama, Quebec, Michigan, Missouri, and Tennessee.

After the brisk run on 40m, Eric paused to check POTA Spots for P2P QSO opportunities and at 2011 UTC he made a P2P QSO with KD8IE who was activating Cooperrider-Kent Bog State Nature Preserve (K-9401) in Ohio.

In all, Eric made thirty-four QSOs in forty-seven minutes. All of Eric's QSOs were CW and were made at the 5-watt level.