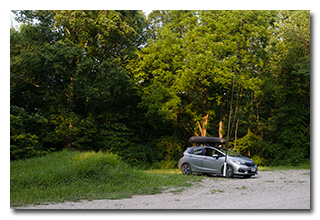 Eric arrived at Waterloo Wildlife Area at about 2245 UTC following a long day of driving and POTA activations. Eric quickly deployed his 28½' wire antenna on his 31' Jackite telescoping fiberglass mast and drive-on base. Eric set up his KX3 inside the car. Eric was on the air at 2253 UTC.

Eric began operations by checking POTA Spots for P2P QSO opportunities and within minutes had succeeded in making a QSO on 40m with W9AV who was activating Lower Wisconsin State Riverway State Park (K-5643) in Wisconsin.

Finding his own frequency on 40m to run, Eric made four QSOs in about four minutes. This run ended with a QSO at 2302 UTC with KC8HZ who was activating Skegemog Lake State Wildlife Area (K-6783) in Michigan.

Pausing to check POTA Spots again, at 2307 Eric made a P2P QSO on 30m with NK4DX who was activating Holey Land Wildlife Management Area (K-6310) in Florida.

Returning to 40m to run a frequency, Eric made fifteen additional QSOs in about twenty minutes.

In all, Eric made twenty-one QSOs, including three P2P QSO. All of Eric's QSOs were CW and were made at the 5-watt level.