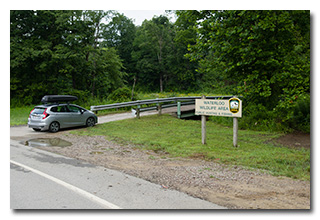 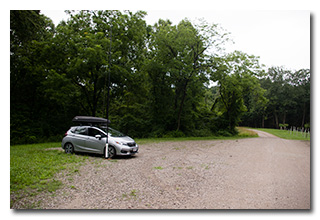 Eric arrived at Waterloo Wildlife Area at about 1200 UTC on day a day that promised rain and thunderstorms. Fortunately, Eric was able to deploy his 28½' wire antenna on his 31' Jackite telescoping fiberglass mast and drive-on base without being rained on. Because of the chance for rain and because of his aggressive time schedule, Eric set up his KX3 inside the car. Eric was on the air at 1215 UTC.

Eric began operations by finding a frequency to run on 40m, spotted himself to the POTA Spots website, and in twenty-one minutes succeeded in making twenty QSOs. Eric then checked POTA Spots for P2P opportunities and made a P2P QSO on 20m with K4NYM who was activating Hilochee Wildlife Management Area (K-6309) in Florida.

In all, Eric made twenty-one QSOs, including one P2P QSO. All of Eric's QSOs were CW and were made at the 5-watt level.