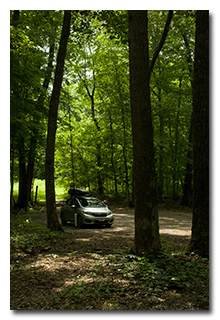 On Sunday, June 20, 2021, one member of the Southeast Ohio Radio Adventure Team performed a successful activation of Waterloo Wildlife Area in Ohio as part of the Parks on the Air (POTA; link) program.

On a beautiful Sunday morning, Eric McFadden, WD8RIF, returned to the cul-de-sac at the end of ODNR Road 1 in Waterloo Wildlife Area, arriving at about 1415 UTC. While little Theo-dog refused to leave the car, Eric deployed his 28½' wire antenna on his 31' Jackite telescoping fiberglass mast and drive-on base and set up his KX3 inside the car. Eric was on the air at 1426 UTC. Because of mosquitoes in this wooded cul-de-sac location, Eric was forced to operate with his car's doors and windows closed.

Eric was pleased to find he had sufficient cell-signal at this location to use the POTA Spots website (link) to spot himself and to look for possible park-to-park (P2P) QSOs.

Eric had planned to try to validate this activation by making ten or more QSOs solely on 20m. Finding himself a frequency on 20m, Eric spotted himself and began calling "CQ POTA". Several minutes of calling CQ went by before Eric made a QSO at 1431 UTC with WB2MQQ in New York. Hoping that this indicated 20m was going to be good for short paths, Eric continued to call CQ on 20m but gave up after ten minutes of calling produced no additional QSOs. Clearly, conditions weren't right for Eric to validate his activation using only 20m.

Finding himself a frequency on 40m, Eric spotted himself and began calling CQ. His first QSO on 40m came at 1442 UTC, and was with stalwart POTA Hunter N3XLS in Pennsylvania. QSOs came quickly on 40m, with Eric's ninth QSO on the band coming at 1450 UTC.

After the nice run of successful P2P Hunts, Eric found himself a frequency on 30m and began calling CQ. His first QSO in this run came at 1513 UTC with N5PU in Mississippi. QSOs on 30m came quickly, with Eric's fifth QSO in this run coming at 1517 UTC.

In all, Eric made twenty QSOs, including five P2P QSOs, in just over forty minutes. All of Eric's QSOs were CW and were made at the 5-watt level.